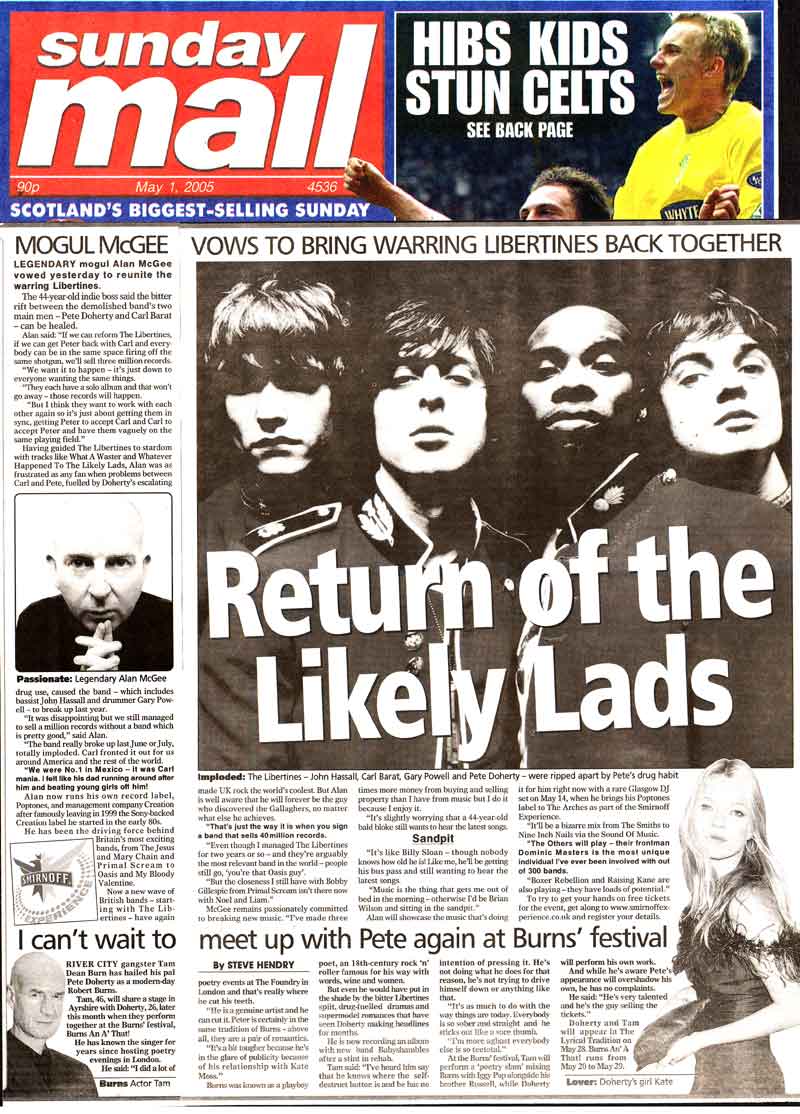 
Sunday Mail Scotland's Biggest-Selling Sunday The Foundry I can't wait to meet up with Pete again at Burns' festival By STEVE HENDRY May 1 2005
RIVER CITY gangster Tam Burn has hailed his pal Doherty as a modern-day Robert Burns. Tam, 46, will share a stage in Ayrshire with Doherty, 26, later this month when they perform together at the Burns' festival, Bums An A' That! He has known the singer for years since' hosting poetry evenings in London. He said: "I did a lot of poetry events at The Foundry in London and that's really where he cut his teeth. "He is a genuine artist and he can cut it Peter is certainly in the same tradition of Bums - above all, they are a pair of romantics. "It's a bit tougher because he's in the glare of publicity because of his relationship with Kate Moss." Burns was known as a playboy poet, an 18th-century rock 'n' roller famous for his way with words, wine and women. But even he would have [been] put in the shade by the bitter libertines split, drug-fuelled dramas and supermodel romances that have seen Doherty making headlines for months. He is now recording an album with new band Babyshambles after a stint in rehab. Tam said: "I've heard him say that he knows where the self-destruct button is and he has no intention of pressing it. He's not doing what he does for that reason, he's not trying to drive himself down or anything like that. "It's as much to do with the way things are today. Everybody is so sober and straight and he sticks out like a sore thumb. "I'm more aghast everybody else is so teetotal." At the Burns' festival, Tam will perform a 'poetry slam' mixing Burns with Iggy Pop alongside his brother Russell, while Doherty will perform his own work. And while he's aware Pete's appearance will overshadow his own, he has no complaints. He said: "He's very talented and he's the guy selling the tickets." Doherty and Tam will appear in The Lyrical Tradition on May 28. Burns An'A That! runs from May 20 to May 29.