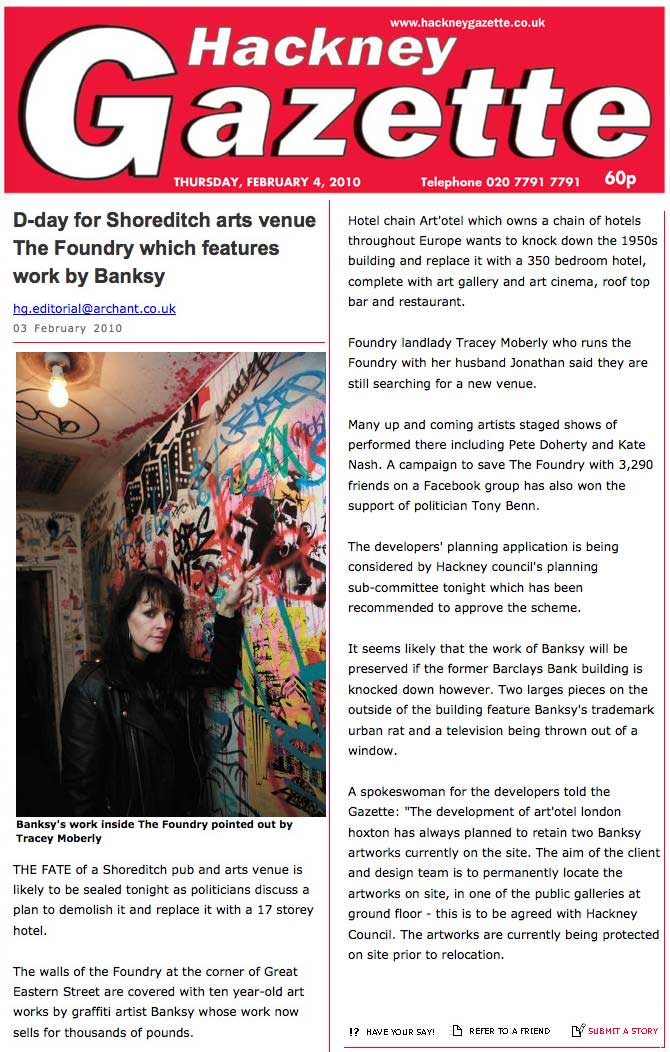 
Hackney Gazette [ link ] The Foundry D-day for Shoreditch arts venue The Foundry which features work by Banksy hg.editorial@archant.co.uk 03 February 2010
THE FATE of a Shoreditch pub and arts venue is likely to be sealed tonight as politicians discuss a plan to demolish it and replace it with a 17 storey hotel. The walls of the Foundry at the corner of Great Eastern Street are covered with ten year-old art works by graffiti artist Banksy whose work now sells for thousands of pounds. Hotel chain Art'otel which owns a chain of hotels throughout Europe wants to knock down the 1950s building and replace it with a 350 bedroom hotel, complete with art gallery and art cinema, roof top bar and restaurant. Foundry landlady Tracey Moberly who runs the Foundry with her husband Jonathan said they are still searching for a new venue. Many up and coming artists staged shows of performed there including Pete Doherty and Kate Nash. A campaign to save The Foundry with 3,290 friends on a Facebook group has also won the support of politician Tony Benn. The developers' planning application is being considered by Hackney council's planning sub-committee tonight which has been recommended to approve the scheme. It seems likely that the work of Banksy will be preserved if the former Barclays Bank building is knocked down however. Two larges pieces on the outside of the building feature Banksy's trademark urban rat and a television being thrown out of a window. A spokeswoman for the developers told the Gazette: "The development of art'otel london hoxton has always planned to retain two Banksy artworks currently on the site. The aim of the client and design team is to permanently locate the artworks on site, in one of the public galleries at ground floor - this is to be agreed with Hackney Council. The artworks are currently being protected on site prior to relocation. caption: Banksy's work inside The Foundry pointed out by Tracey Moberly