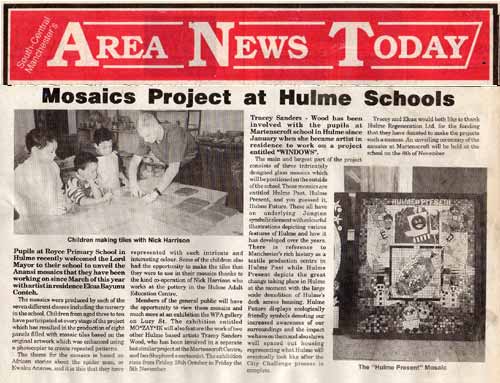 
Area News Today -Tracey Sanders-Wood- Mosaic Project at Hulme Schools Friday 11th November 1994
Tracey Sanders-Wood has been involved with the pupils at Martenscroft school in Hulme since January when she became artist in residence to work on a project entitled "WINDOWS". The main and largest part of the project consists of three intricately designed glass mosaics which will be positioned on the outside of the school. These mosaics are entitled Hulme Past, Hulme Present, and you guessed it, Hulme Future. These all have an underlying Jungian symbolic element with colourful illustrations depicting various features of Hulme and how it has developed over the years. There is reference to Manchester's rich history as a textile production centre in Hulme Past while Hulme Present depicts the great change taking place in Hulme at the moment with the large scale demolition of Hulme's deck access housing. Hulme Future displays ecologically friendly symbols denoting our increased awareness of our surroundings and the impact we have on them and also shows well spaced out housing representing what Hulme will eventually look like after the City Challenge process is complete. Tracey and Ekua would both like to thank Hulme Regeneration Ltd. for the funding that they have donated to make the projects such a success. An unveiling ceremony at Martenscroft will be held at the school on the 8th of November. Members of the general public will have the opportunity to view thes mosaics and much more at an exhibition at the WFA gallery on Lucy St. The exhibition entitled MO*ZAY*IK will also feature the work of two other Hulme based artists Ekua Bayunu Conteh, who has been involved in a serarate but similar project at Royce Primary School and Ian Shepherd a cartoonist. The exhibition runs from Friday 28th October to Friday 5th November. PHOTOGRAPH: The "Hulme Present" Mosaic