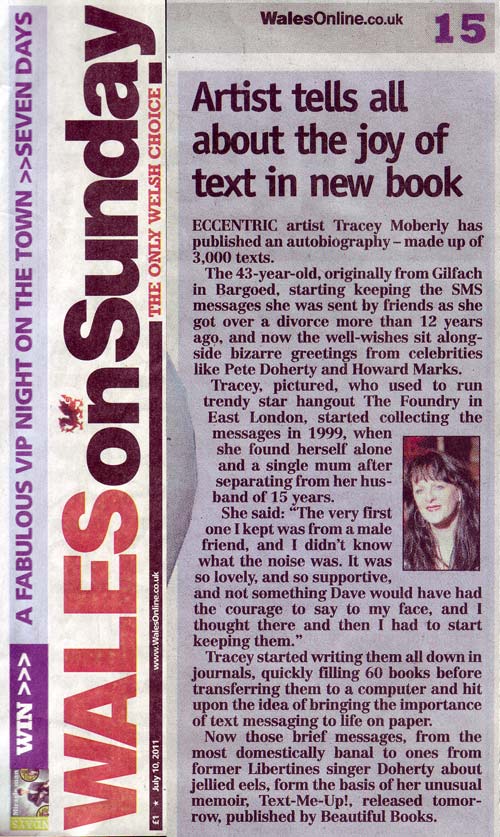 
Wales on Sunday [link] Tracey Moberly Artist tells all about the joy of text in new book by Claire Rees 10 July 2011
ECCENTRIC artist Tracey Moberly has published an autobiography – made up of 3,000 texts. The 43-year-old, originally from Gilfach in Bargoed, starting keeping the SMS messages she was sent by friends as she got over a divorce more than 12 years ago, and now the well-wishes sit alongside bizarre greetings from celebrities like Pete Doherty and Howard Marks. Tracey, pictured, who used to run trendy star hangout The Foundry in East London, started collecting the messages in 1999, when she found herself alone and a single mum after separating from her husband of 15 years. She said: “The very first one I kept was from a male friend, and I didn’t know what the noise was. It was so lovely, and so supportive, and not something Dave would have had the courage to say to my face, and I thought there and then I had to start keeping them.” Tracey started writing them all down in journals, quickly filling 60 books before transferring them to a computer and hit upon the idea of bringing the importance of text messaging to life on paper. Now those brief messages, from the most domestically banal to ones from former Libertines singer Doherty about jellied eels, form the basis of her unusual memoir, Text-Me-Up!, released tomorrow, published by Beautiful Books.