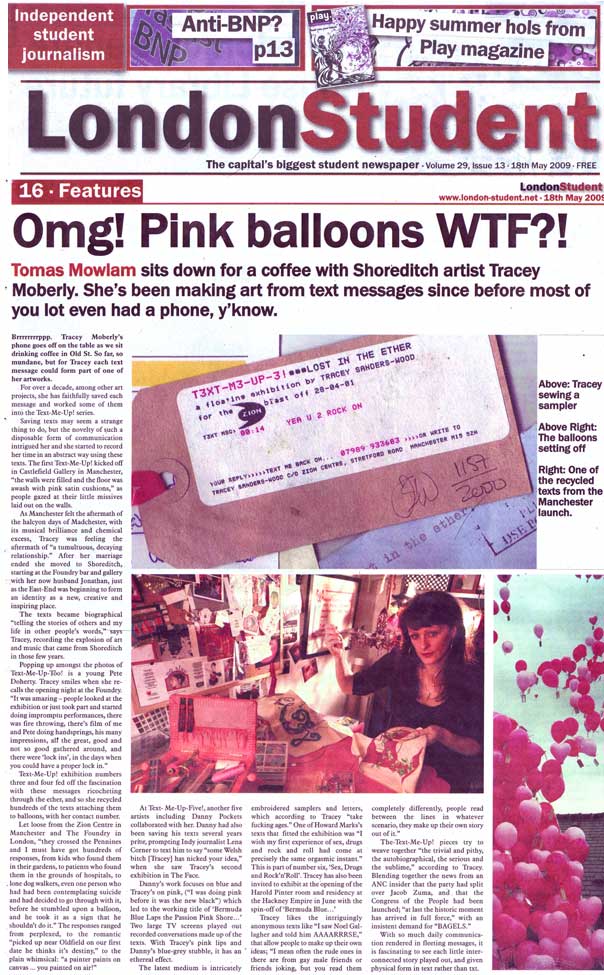 
London Student The capital's biggest student newspaper Tracey Moberly Omg! Pink balloons WTF?! Tomas Mowlam sits down for a coffee with Shoreditch artist Tracey Moberly. She's been making art from text messages since before most of you lot even had a phone, y'know. Tomas Mowlam 18 May 2009
Brrrrrrrrppp. Tracey Moberly's phone goes off on the table as we sit drinking coffee in Old St. So far, so mundane, but for Tracey each text message could form part of one of her artworks. For over a decade, among other art projects, she has faithfully saved each message and worked some of them into the Text-Me-Up! series. Saving texts may seem a strange thing to do, but the novelty of such a disposable form of communication intrigued her and she started to record her time in an abstract way using these texts. The first Text-Me-Up! kicked off in Castlefield Gallery in Manchester, "the walls were filled and the floor was awash with pink satin cushions," as people gazed at their little missives laid out on the walls. As Manchester felt the aftermath of the halcyon days of Madchester, with its musical brilliance and chemical excess, Tracey was feeling the aftermath of "a tumultuous, decaying relationship." After her marriage ended she moved to Shoreditch, starting at the Foundry bar and gallery with her now husband Jonathan, just as the East-End was beginning to form an identity as a new, creative and inspiring place. The texts became biographical "telling the stories of others and my life in other people's words," says Tracey, recording the explosion of art and music that came from Shoreditch in those few years. Popping up amongst the photos of Text-Me-Up~Too! is a young Pete Doherty. Tracey smiles when she recalls the opening night at the Foundry. "It was amazing - people looked at the exhibition or just took part and started doing impromptu performances, there was fire throwing, there's film of me and Pete doing handsprings, his many impressions, all the great, good and not so good gathered around, and there were 'lock ins', in the days when you could have a proper lock in." Text~Me-Up! exhibition numbers three and four fed off the fascination with these messages ricocheting through the ether, and so she recycled hundreds of the texts attaching them to balloons, with her contact number. Let loose from the Zion Centre in Manchester and The Foundry in London, "they crossed the Pennines and 1 must have got hundreds of responses, from kids who found them in their gardens, to patients who found them in the grounds of hospitals, to lone dog walkers, even one person who had been contemplating suicide and had decided to go through with it, before he stumbled upon a balloon, and he took it as a sign that he shouldn't do it." The responses ranged from perplexed, to the romantic "picked up near Oldfield on our first date he thinks it's destiny," to the plain whimsical: "a painter paints on canvas ... you painted on air!" At Text-Me-Up-Five!, another five artists including Danny Pockets collaborated with her. Danny had also been saving his texts several years prior, prompting Indy journalist Lena Corner to text him to say "some Welsh bitch [Tracey] has nicked your idea," when she saw Tracey's second exhibition in The Face. Danny's work focuses on blue and Tracey's on pink, ("I was doing pink before it was the new black") which led to the working title of 'Bermuda Blue Laps the Passion Pink Shore... ' Two large TV screens played out recorded conversations made up of the texts. With Tracey's pink lips and Danny's blue-grey stubble, it has an ethereal effect. The latest medium is intricately embroidered samplers and letters, which according to Tracey "take fucking ages." One of Howard Marks's texts that fitted the exhibition was "I wish my first experience of sex, drugs and rock and roll had come at precisely the same orgasmic instant." This is part of number six, 'Sex, Drugs and Rock'n'Roll'. Tracey has also been invited to exhibit at the opening of the Harold Pinter room and residency at the Hackney Empire in June with the spin-off of 'Bermuda Blue...' Tracey likes the intriguingly anonymous texts like "I saw Noel Gallagher and told him AAAARRRSE," that allow people to make up their own ideas; "I mean often the rude ones in there are from gay male friends or friends joking, but you read them completely differently, people read between the lines in whatever scenario, they make up their own story out of it." The-Text-Me-Up! pieces try to weave together "the trivial and pithy, the autobiographical, the serious and the sublime," according to Tracey. Blending together the news from an ANC insider that the party had split over Jacob Zuma and that the Congress of the People had been launched; "at last the historic moment has arrived in full force," with an insistent demand for "BAGELS." With so much daily communication rendered in fleeting messages, it is fascinating to see each little interconnected story played out, and given physical form in text rather than txt.