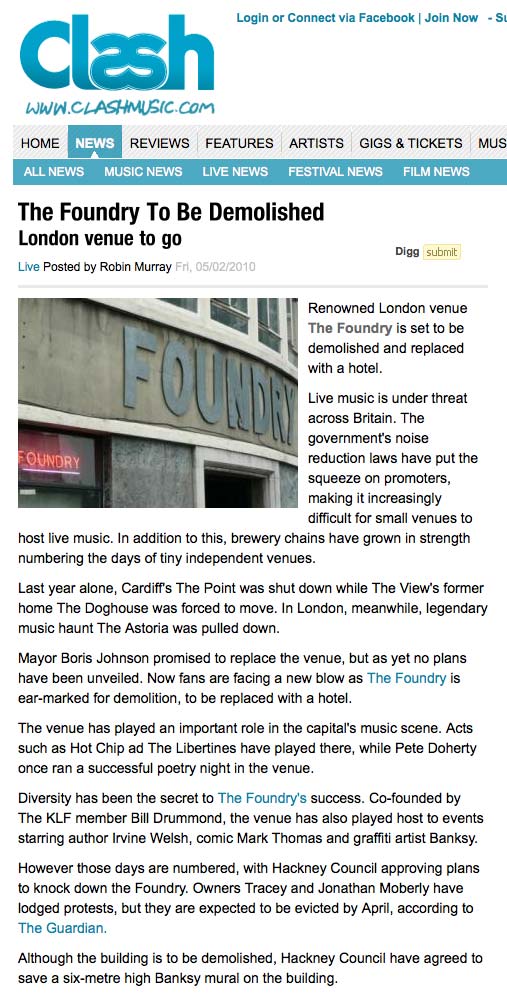 
Clash www.clashmusic.com
[ link ] The Foundry The Foundry To Be Demolished London venue to go by Robin Murray 05/02/2010
Renowned London venue The Foundry is set to be demolished and replaced with a hotel. Live music is under threat across Britain. The government's noise reduction laws have put the squeeze on promoters, making it increasingly difficult for small venues to host live music. In addition to this, brewery chains have grown in strength numbering the days of tiny independent venues. Last year alone, Cardiff's The Point was shut down while The View's former home The Doghouse was forced to move. In London, meanwhile, legendary music haunt The Astoria was pulled down. Mayor Boris Johnson promised to replace the venue, but as yet no plans have been unveiled. Now fans are facing a new blow as The Foundry is ear-marked for demolition, to be replaced with a hotel. The venue has played an important role in the capital's music scene. Acts such as Hot Chip ad The Libertines have played there, while Pete Doherty once ran a successful poetry night in the venue. Diversity has been the secret to The Foundry's success. Co-founded by The KLF member Bill Drummond, the venue has also played host to events starring author Irvine Welsh, comic Mark Thomas and graffiti artist Banksy. However those days are numbered, with Hackney Council approving plans to knock down the Foundry. Owners Tracey and Jonathan Moberly have lodged protests, but they are expected to be evicted by April, according to The Guardian. Although the building is to be demolished, Hackney Council have agreed to save a six-metre high Banksy mural on the building.