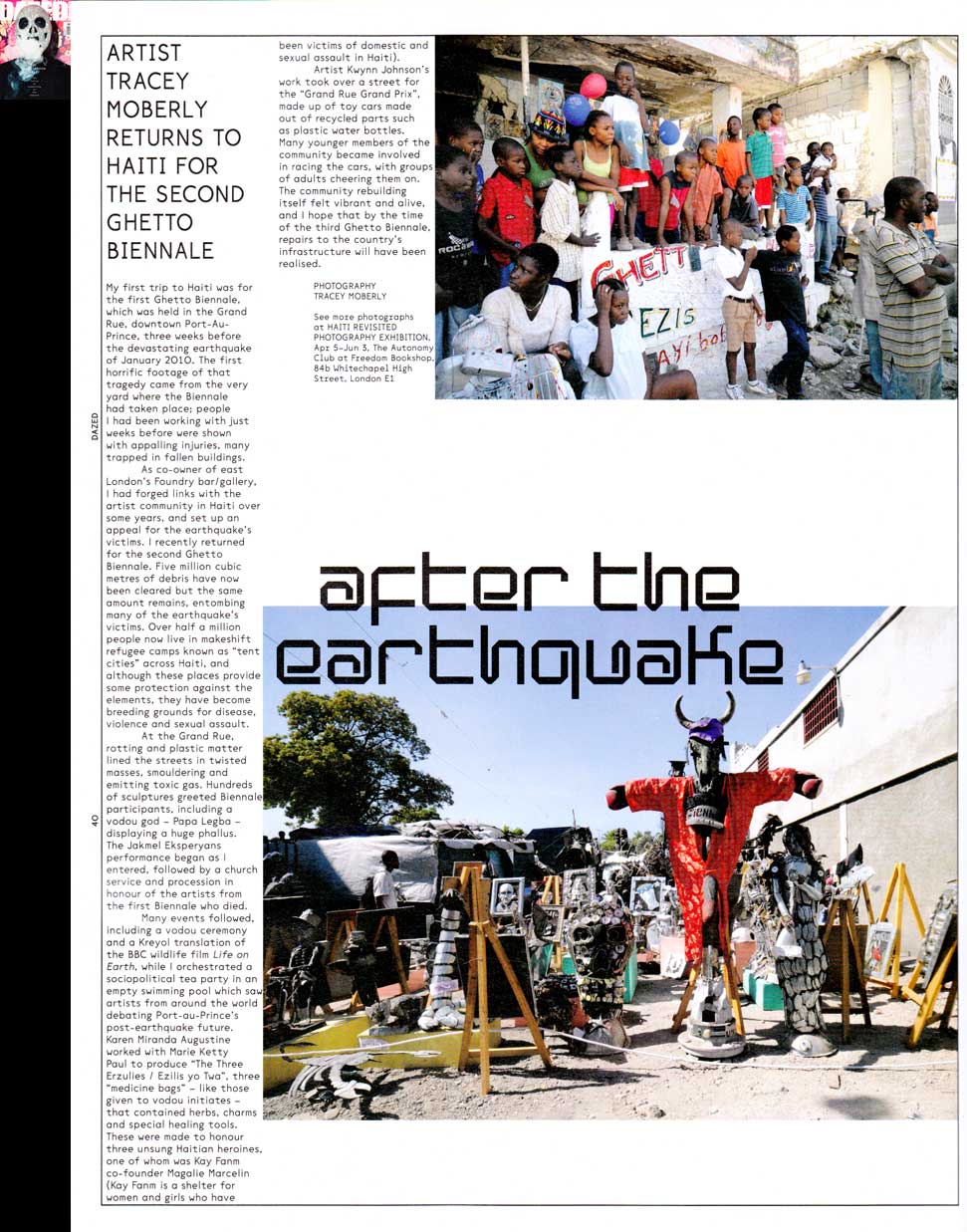 
Daxed & Confused Tracey Moberly TRACEY MOBERLY RETURNS TO HAITI FOR THE SECOND GHETTO BIENNALE Tracey Moberly 12 April 2012
ARTIST TRACEY MOBERLY RETURNS TO HAITI FOR THE SECOND GHETTO BIENNALE My first trip to Haiti was for the first Ghetto Biennale, which was held in the Grand Rue, downtown Port-Au-Prince, three weeks before the devastating earthquake of January 2010. The first horrific footage of that tragedy came from the very yard where the Biennale had taken place; people I had been working with just weeks before were shown with appalling injuries, many trapped in fallen buildings. As co-owner of east London's Foundry bar/gallery, I had forged links with the artist community in Haiti over some years, and set up an appeal for the earthquake's victims. I recently returned for the second Ghetto Biennale. Five million cubic metres of debris have now been cleared but the same amount remains, entombing many of the earthquake's victims. Over half a million people now live in makeshift refugee camps known as "tent cities" across Haiti, and although these places provide some protection against the elements, they have become breeding grounds for disease, violence and sexual assault . At the Grand Rue, rotting and plastic matter lined the streets in twisted masses, smouldering and emitting toxic gas. Hundreds of sculptures greeted Biennale participants, including a vodou god - Papa Legba - displaying a huge phallus. The Jakmel Eksperyans performance began as I entered, followed by a church service and procession in honour of the artists from the first Biennale who died. Many events followed, including a vodou ceremony and a Kreyol translation of the BBC wildlife film Life on Earth, while I orchestrated a sociopolitical tea party in an empty swimming pool with artists from around the world debating Port-au-Prince's post-earthquake future. Karen Miranda Augustine worked with Marie Ketty Paul to produce "The Three Erzulies / Ezilis yo Twa", three "medicine bags" - like those given to vodou initiates - that contained herbs, charms and special healing tools. These were made to honour three unsung Haitian heroines, one of whom was Kay Fanm co-founder Magalie Marcelin (Kay Fanm is a shelter for women and who have been victims of domestic and sexual assault in Haiti). Artist Kwynn Johnson's work took over a street for the "Grand Rue Grand Prix", made up of toy cars made out of recycled parts such as plastic water bottles. Many younger members of the community became involved in racing the cars, with groups of adults cheering them on. The community rebuilding itself felt vibrant and alive, and I hope that by the time of the third Ghetto Biennale, repairs to the country's infrastructure will have been realised. PHOTOGRAPHY TRACEY MOBERLY See more photographs at HAITI REVISITED PHOTOGRAPHY EXHIBITION. Apr 5 - Jun 3, The Autonomy Club at Freedom Bookshop, 84b Whitechapel High Street, London E1.