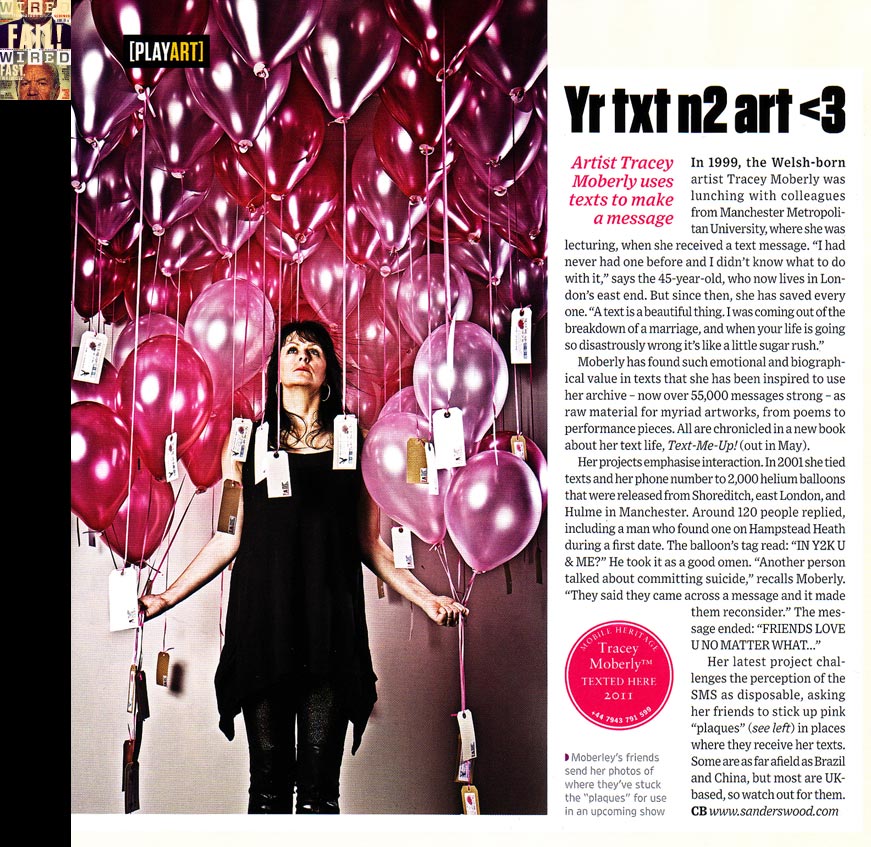 
Wired (UK) wired.co.uk Tracey Moberly Yr txt n2 art <3 Artist Tracey Moberly uses texts to make a message May 2011
In 1999, the Welsh-born artist Tracey Moberly was lunching with colleagues from Manchester Metropolitan University, where she was lecturing, when she received a text message. "I had never had one before and I didn't know what to do with it," says the 45-year-old, who now lives in London's east end. But since then, she has saved every one. "A text is a beautiful thing. I was coming out of the breakdown of a marriage, and when your life is going so disastrously wrong it's like a little sugar rush." Moberly has found such emotional and biographical value in texts that she has been inspired to use her archive -- now over 55,000 messages strong -- as raw material for myriad artworks, from poems to performance pieces. All are chronicled in a new book about her text life, Text-Me-Up! (out in May). Her projects emphasise interaction. In 2001 she tied texts and her phone number to 2,000 helium balloons that were released from Shoreditch, east London, and Hulme in Manchester. Around 120 people replied, including a man who found one on Hampstead Heath during a first date. The balloon's tag read: "IN Y2K U & ME?" He took it as a good omen. "Another person talked about committing suicide," recalls Moberly. "They said they came across a message and it made them reconsider." The message ended: "FRIENDS LOVE U NO MATTER WHAT..." Her latest project challenges the perception of the SMS as disposable, asking her friends to stick up pink "plaques" in places where they receive her texts. Some are as far afield as Brazil and China, but most are UK based, so watch out for them. link: wired.co.uk