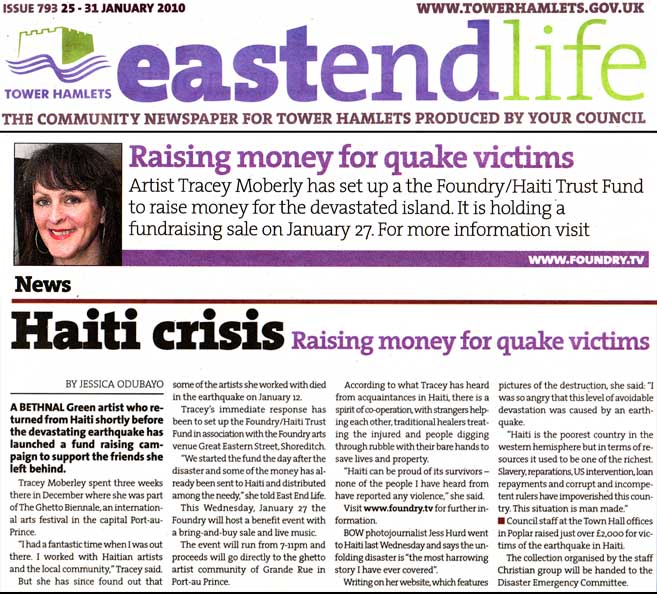 
East End Life Tracey Moberly Hait Crisis Raising money for Earthquake victims: Artist Tracey Moberly has set up the Foundry / Haiti Fund to raise moeny for the devastated island. It is holding a fundraising sale on January 27. For more information visit www.foundry.tv BY JESSICA ODUBAYO 25-31 January 2010
A BETHNAL Green artist who returned from Haiti shortly before the devastating earthquake has launched a fund raising campaign to support the friends she left behind. Tracey Moberley spent three weeks there in December where she was part of The Ghetto Biennale, an international arts festival in the capital Port-auPrince. "I had a fantastic time when 1 was out there. 1 worked with Haitian artists and the local corrutlUnity," Tracey said. But she has since found out that one of the artists she worked with died in the earthquake on January 12. Tracey's immediate response has been to set up the Foundry Haiti Fund in association with the Foundry arts venue in Great Eastern Street, Shoreditch. "We started the fund the day after the disaster and some of the money has already been sent to Haiti and distributed among the needy," she told East End life. This Wednesday, January 27 the Foundry will host a benefit event with a bring-and-buy sale and live music. The event will run from 7-11pm and proceeds will go directly to the ghetto artist community of Grande Rue in Port-au Prince. According to what Tracey has heard from acquaintances in Haiti, there is a spirit of co-operation, with strangers helping each other, traditional healers treating the injured and people digging through rubble with their bare hands to save lives and property. "Haiti can be proud of its survivors - none of the people 1 have heard from have reported any violence," she said. Visit www.foundry.tv for further information. BOW photojourrialist Jess Hurd went to Haiti last Wednesday and says the unfolding disaster is "the most harrowing story 1 have ever covered". Writing on her website, which features pictures of the destru