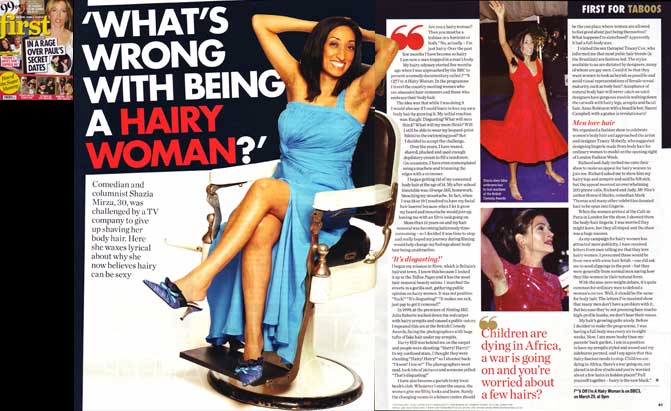 
first for news, views & lifestyle Tracey Moberly What's Wrong with being a Hairy Woman? Comedian and columnist Shazia Mirza, 30, was challenged by a TV company to give up shaving her body hair. Here shw waxes lyrical about why she now believes hairy can be sexy Shazia Mirza 31 March - 6 April 2007
"Are you a hairy woman? Then you must he a lesbian or a feminist or both." No, actually - I'm just hairy. Over the past few months I have become so hairy I am now a man trapped in a man's body. My hairy odyssey started five months ago when I was approached by the BBC to present a comedy documentary called F **k Off I'm A Hairy Woman. In the programme I travel the country meeting women who are obsessive hair-removers and those who embrace their body hair. The idea was that while I was doing it I would also see if I could learn to love my own body hair by growing it. My initial reaction was: Euugh! Disgusting! What will men think? What will my mum think? Will I still be able to wear my leopard-print bikini to the swimming pool? But I decided to accept the challenge. Over the years, I have waxed, shaved, plucked and used enough depilatory cream to fill a rainforest. On occasions, I have even contemplated using a machete and trimming the edges with a strimmer. I began getting rid of my unwanted body hair at the age of 14. My after-school timetable was: Grange Hill, homework, bleaching my moustache. In fact, when I was 18 or 19 1 resolved to have my facial hair lasered because when I let it grow my beard and moustache would join up, leaving me with an Elvis look going on. More than 15 years on and my hair removal was becoming ludicrously time-consuming - so I decided it was time to stop and really hoped my journey during filming would help change my feelings about body hair being unattractive.

I began my mission in Hove, which is Britain's hairiest town. I know this because I looked it up in the Yellow Pages and it has the most hair-removal beauty salons. I marched the streets in a gorilla suit, gathering public opinion on hairy women. It was not positive: "Yuck!" "It's disgusting? "1t makes me sick, just pay to get it removed!" In 1999, at the premiere of Notting Hill Julia Roberts walked down the red carpet with hairy armpits and caused a public outcry. I repeated this sin at the British Comedy Awards, facing the photographers with huge tufts of fake hair under my armpits. Harry Hill was behind me on the carpet and people were shouting:"Harry! Harry!" In my confused state, I thought they were shouting "Hairy! Hairy!" so I shouted back: "I know! I know!" The photographers went mad, took lots of pictures and someone yelled: "That's disgusting!" I have also become a pariah in my local health club. Whenever I enter the sauna, the women give me filthy looks and leave. Surely the changing rooms in a leisure centre should be the one place where women are allowed to feel good about just being themselves? What happened to sisterhood? Apparently it had a full-body wax. I visited the sex therapist Tracey Cox, who informed me that most pubic hair trends (ie the Brazilian) are fashion-led. The styles available to us are dictated by designers, many of whom are gay men. Could it be that they want women to look as boyish as possible and avoid visual representations of female sexual maturity such as body hair? Acceptance of natural body hair will never catch on until designers have gorgeous models walking down the catwalk with hairy legs, armpits and facial hair. Anne Robinson with a beard is hot; Naomi Campbell with a goatee is revolutionary!

We organised a fashion show to celebrate women's body hair and approached the artist and designer Tracey Moberly who suggested designing lingerie made from body hair for ordinary women to model on the opening night of London Fashion Week. Richard and Judy invited me onto their show to make an appeal for hairy women to join me. Richard asked me to show him my hairy legs and armpits and said he felt sick, but the appeal received an overwhelming 200 phone calls. Richard and Judy, Mr Nice's author Howard Marks, comedian Mark Thomas and many other celebrities donated hair to be spun into lingerie. When the women arrived at the Cafe de Paris in London for the show I showed them the body-hair lingerie. I was worried they might leave, but they all stayed and the show was a huge success. As my campaign for hairy women has attracted more publicity I have received letters from men telling me that they love hairy women. I presumed these would be from men with some hair fetish - one did ask me to send clippings in the post - but they were generally from normal men saying how they like women in their natural form. With the size-zero weight debate, it's quite common for ordinary men to defend a woman's curves. Well, it should be the same for body hair. The letters I've received show that many men don't have a problem with it. But because they're not preening faux-macho high-profile hunks, we don't hear their voices. My hair's growing quite nicely. Before I decided to make the programme, I was having a full body wax every six to eight weeks. Now I am more bushy than my parents' back garden. I am in a position to have my armpits styled and waxed and my sideburns permed, and I say again that this hairy fascism needs to stop. Children are dying in Africa, there's a war going on, our planet is in dire straits and you're worried about a few hairs in hidden places? Pull yourself together - hairy is the new black"