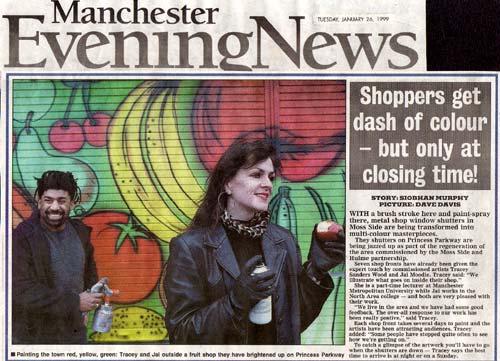 
Manchester Evening News -Tracey Sanders-Wood- Shoppers get dash of colour - but only at closing time! Tuesday January 26 1999 Story: Siobhan Murphy Picture: Dave Davies
WITH a brush stroke here and paint-spray there, metal shop window shutters in Moss Side are being transformed into multi-coloured masterpieces. The shutters on Princess parkway are being jazzed up as part of the regeneration of the area commissioned by the Moss Side and Hulme partnership. Seven shop fronts have already been given the expert touch by commissioned artists Tracey Sanders-Wood and Jai Moodie. Tracey said: "We illustrate what goes on inside their shop." She is a part-time lecturer at Manchester Metropolitan University while Jai works in the North Area College - and both are pleased with their work. "We live in the area and we have had some good feedback. The all-over response to our work has been really positive," said Tracey. Each shop front takes several days to paint and the artists have been attracting audiences Tracey added: "Some people have stopped quite often to see how we're getting on." To catch a glimpse of the artwork you'll have to go when the shutters are down - Tracey says the best time to arrive is at night or on a Sunday. PHOTOGRAPH: Painting the town red, yellow, green: Tracey and Jai outside a fruit shop they have brightened up on Princess Parkway.