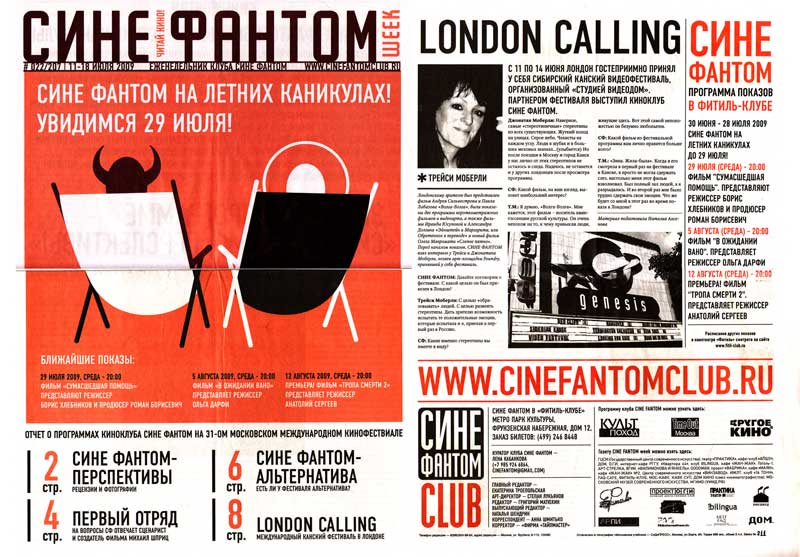 
CINEFANTOM www.cinefantom.ru Tracey Moberly London Calling 11-18 July 2009
From 11 to 14 June London played host to the Siberian Kansk Video Festival, brought by VideoDom Studio, CINE FANTOM  acting as partner of the festival.  London viewers had an opportunity to see Andrey Silvestrov's and Pavel Labazov's  Volga-Volga, two programmes of short films and video art, as well as Einstein And Margarita by Iraida Yusoupova and Alexander Dolgin and Oleg Mavromatti's Blind Spot.  CINE FANTOM interviewed Tracey and Jonathan Moberly, managers of The Foundry, the art space that hosted the festival. CINE FANTOM: Let's talk about the Festival. What was the main idea of bringing it to London? TRACEY MOBERLY: To educate people. To break any possibly existing stereotypes. And to share the enjoyment I had when I first saw those films out there, in Russia. CINE FANTOM: What kind of stereotypes? JONATHAN MOBERLY: Probably, the most typical stereotypes of all: it's cold, everything's grey. Everyone's depressed. Everyone's repressed. People dressed in thick coats and fur hats. And it turned out just completely not like that at all. All those stereotypes vanished. I hope that everyone who will come to watch the films tonight will also learn something completely new about Russia. CINE FANTOM: Speaking if the programme, which of the films is your favourite one? TRACEY MOBERLY: It has to be Once Upon A Time There Was Zina. The film touched me to the core. When I was first watching it in Kansk, I just couldn't hold back my tears. I was so embarrassed: the cinema was full and I was crying, unable to stop. And when I watched it second time I thought it would be different, but it wasn't.  I'm going to see it tonight and it will probably be like that again.