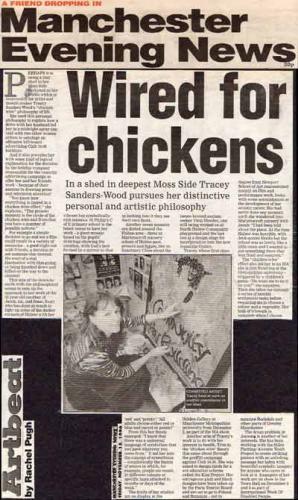 
Manchester Evening News -Tracey Sanders-Wood- Wired for chickens Friday, November 15, 1996
In a shed in deepest Moss Side Tracey Sanders-Wood pursues her distinctive personal and artistic philosophy PERHAPS it is using a tiny shed in her Moss Side backyard as her studio which is responsible for artist and mosaic-maker Tracey sanders-Wood's "chic ken wire" philosophy of life. She used this personal philosophy to explain how a drive with her husband lead her to a midnight spray can raid with two other women artists to sabotage an offensive bill-board advertising Club 18-30 holidays. And it also provides her with some kind of logical explanation for the decision by the holiday company responsible for the raunchy advertising campaign to offer her and her friends work - because of their success in drawing press and television attention! "You know how everything is linked in a chicken wire effect," she explains. . "The present moment is the circle of the chicken wire and from that you have a number of possible actions." "For example a simple decision to go and see a film could result in a variety of scenarios - a good night out with friends; a decision to see someone else instead; the start of a real fascination with film-going or being knocked down and killed on the way to the cinema! This mix of the down-to-earth with the philosophical seems to sum up the approach to the work of the artist who has done so much to help light up some of the darker corners of Hulme with her vibrant but symbolically rich mosaics. St. Philip's C of E primary school is the latest venue to have her work - a giant mosaic based on the pupils' drawings showing the creation, with God's face formed by a mirror so that in looking into it they see their own faces. Another seven mosaics are dotted around the Hulme area - three at Martenscroft nursery school of Hulme past, present and future, two in sanctuary Close about the issues around asylum seeker Viraj Mendez, one still being worked on at North Hulme Community playground and the last one at a design stage for incorporation into the new Aquarius Centre. Tracey whose first class honours degree from Newport School of art concentrated mainly on film and performance work, looks with some astonishment at the development of her artistic career. She had never done any mosaics until she wandered into Martenscroft nursery with onee of her sons. "I had been told about the place. At the time Hulme was horrible, with deck-access blocks but the school was so lovely, like a little oasis and I wanted to put something there that was fixed and concrete." The "chicken-wire" effect also lead her to an MA she is just finishing at the Metropolitan University - triggered by a childrens game. "Do you want me to do it on you?' she enquires. Then she takes me through a series of mental arithmetic tasks before requiring me to choose a colur and a vegetable. her look of triumph is complete when I choose 'red' and 'potato': "All adults choose either rd or blue and carrot or potato!" From this her thesis emerged : "I knew that there was a universal language of symbolism that you have wherever you come from." It lead her to the concept of synesthesia - simplistically the fusion of senses in which, for example, people see music in different colours or specific hues attached to months or days of the week." The fruits of her studies are on display at the Holden Gallery at Manchester metropolitan University from december 2, as part of the MA show. Another arm of Tracey's work is to do with her interest in health. True to the 'chicken-wire' theory this came about through the graffiti campaign against Club 18-30. She was asked to design cards for a sex education scheme called the Kiss Project. Her outrageous pink and black designs have been taken up by the Paris Tourist Board and are set to go to Poland and Romania - not to mention Rochdale and other parts of Greater manchester. The drugs problem in Ancoats is another of her interests. She has been working with Miles Platting/Ancoats Youth Project to create striking posters with an anti-drug message but laden with beautiful symbolic imagery for anyone who cares to look at it. Examples of her work are on show in the Town hall on December 2 and 3 as part of International Week of Disabled People.