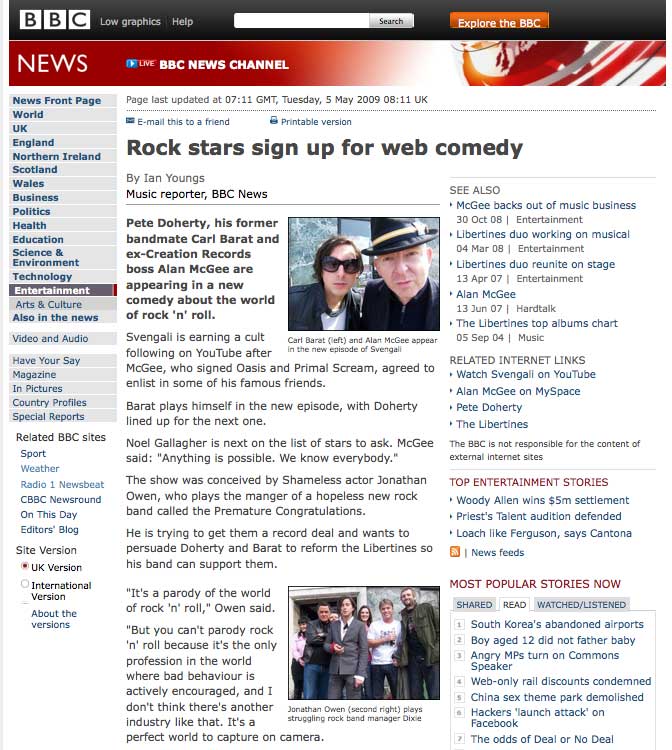 
news.bbc.co.uk link Tracey Moberly Rock stars sign up for web comedy Ian Youngs, Music reporter, BBC News Tuesday, 5 May 2009 08:11 UK
Pete Doherty, his former bandmate Carl Barat and ex-Creation Records boss Alan McGee are appearing in a new comedy about the world of rock 'n' roll. Svengali is earning a cult following on YouTube after McGee, who signed Oasis and Primal Scream, agreed to enlist in some of his famous friends. Barat plays himself in the new episode, with Doherty lined up for the next one. Noel Gallagher is next on the list of stars to ask. McGee said: "Anything is possible. We know everybody." The show was conceived by Shameless actor Jonathan Owen, who plays the manger of a hopeless new rock band called the Premature Congratulations. He is trying to get them a record deal and wants to persuade Doherty and Barat to reform the Libertines so his band can support them. "It's a parody of the world of rock 'n' roll," Owen said. "But you can't parody rock 'n' roll because it's the only profession in the world where bad behaviour is actively encouraged, and I don't think there's another industry like that. It's a perfect world to capture on camera. "I wanted to use real rock and pop stars to play themselves," he continued. "People love to send themselves up so I was absolutely delighted that people like Alan McGee and Carl Barat came in and played themselves, and more people now want to be in it as well." McGee initially agreed to make a cameo appearance in the second episode, but liked it so much that he has opened his contacts book. Owen said: "The next step is that we want to get Russell Brand and Noel Gallagher. Alan's very good friends with them and he's basically said to us, 'I'll get whoever you want.'" I'm not trying to get a Bafta or an Oscar - I'm playing Alan McGee with guys that I've just met who I like Alan McGee McGee said: "Because I know almost everybody in the music business, it's not that hard for me to phone them up and go, 'do you want to be in a viral thing?' "I'm just having a laugh. It's not serious. I'm not trying to get a Bafta or an Oscar. "I'm playing Alan McGee with guys that I've just met who I like. And bizarrely, it works and I like the people, so I'll carry on doing it." Owen has inside knowledge of the music industry after having a record deal as part of The Pocket Devils in the 1990s, while Svengali's scriptwriter Dean Cavanagh - Irvine Welsh's writing partner - was in Glamorous Hooligan. The director, Phillip John, who has made episodes of BBC One drama Ashes to Ashes, was in punk band Reptile Ranch. Svengali's cast also features Smack the Pony's Sally Phillips. Owen said they had been approached to turn the show into a film, and were currently talking to Stephen Fry's production company. captions: Jonathan Owen (second right) with cast and guests in Svengali Jonathan Owen (second right) plays struggling rock band manager Dixie