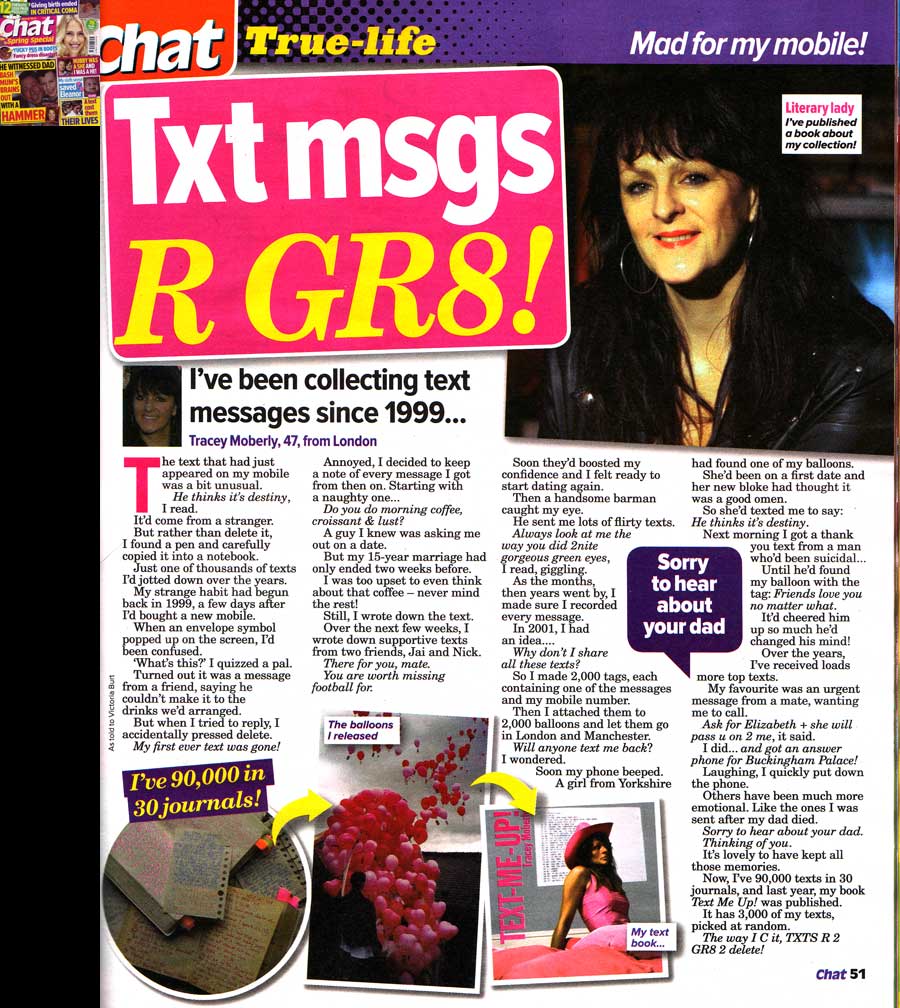 
Chat Spring Special Tracey Moberly Txt msgs R GR8! I've been collecting text messages since 1999... Tracey Moberly, London March 2012
The text that had just appeared on my mobile was a bit unusual. He thinks it's destiny, I read. It'd come from a stranger. But rather than delete it, I found a pen and carefully / copied it into a notebook. Just one ofthousands of texts I'd jotted down over the years. My strange habit had begun back in 1999, a few days after I'd bought a new mobile. When an envelope symbol popped up on the screen, I'd been confused. 'What's this?' I quizzed a pal. Turned out it was a message from a friend, saying he couldn't make it to the drinks we'd arranged. But when I tried to reply, I accidentally pressed delete. My first ever text was gone! Annoyed, I decided to keep a note of every message I got from then on. Starting with a naughty one ... Do you do morning coffee, croissant & lust? A guy I knew was asking me out on a date. But my 15-year marriage had only ended two weeks before. I was too upset to even think about that coffee - never mind the rest! Still, I wrote down the text. Over the next few weeks, I wrote down supportive texts from two friends, Jai and Nick. There for you, mate. You are worth missing football for. Soon they'd boosted my confidence and I felt ready to start dating again. Then a handsome barman caught my eye. He sent me lots of flirty texts. Always look at me the way you did 2nite gorgeous green eyes, I read, giggling. As the months, then years went by, I made sure I recorded every message. In 2001, I had an idea.... Why don't I share all these texts? So I made 2,000 tags, each containing one of the messages and my mobile number. Then I attached them to 2,000 balloons and let them go in London and Manchester. Will anyone text me back? I wondered. Soon my phone beeped. A girl from Yorkshire had found one of my balloons. She'd been on a first date and her new bloke had thought it was a good omen. So she'd texted me to say: He thinks it's destiny. Next morning I got a thank you text from a man who'd been suicidal... Until he'd found my balloon with the tag: Friends love you no matter what. It'd cheered him up so much he'd changed his mind! Over the years, I've received loads more top texts. My favourite was an urgent message from a mate, wanting me to call. Ask for Elizabeth + she will . pass u on 2 me, it said. I did ... and got an answer phone for Buckingham Palace! Laughing, I quickly put down the phone. Others have been much more emotional. Like the ones I was sent after my dad died. Sorry to hear about your dad. Thinking of you. It's lovely to have kept all those memories. Now, I've 90,000 texts in 30 journals, and last year, my book Text Me Up! was published. It has 3,000 of my texts, picked at random. The way I C it, TXTS R 2 GRB 2 delete!