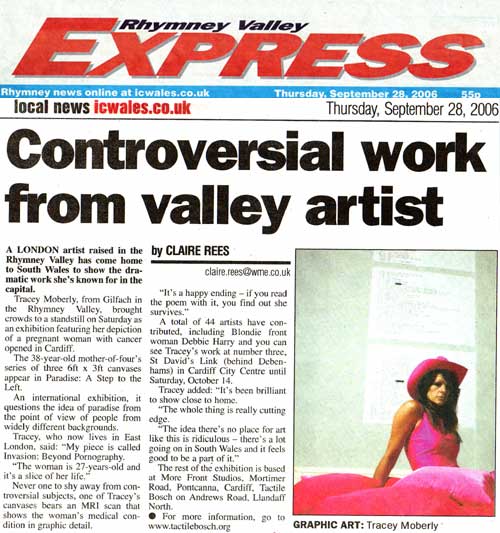 
Rhymny Valley Express Tracey Moberly Sanders-Wood Controversial work from valley artist by Claire Rees Thursday September 28 2006
A LONDON artist raised in the Rhymney Valley has come home to Wales to show the dramatic work shes known for in the capital. Tracey Moberly, from Gilfach in the Rhymney Valley, brought crowds to a standstill on Saturday as an exhibition featuring her depiction of a pregnant woman with cancer opened in Cardiff. The 38-year-old-mother-of four's series of three 6ft x 3ft canvases appear in Paradise: A Step to the Left. An international exhibition, it questions Paradise from the point of view of people from widely different backgrounds. Tracey who know lives in East London said: "My piece is called Invasion: Beyond Pornography." "The woman is 27-years old and it's a slice of her life." Never one to shy away from controversial subjects, one of Tracey's canvases bears the MRI scan that shows the woman's medical condition in graphic detail. "It's a happy ending - if you read the poem with it, you find out she survives." A total of 44 artists have contributed, including Blondie front woman Debbie Harry and you can see Tracey's work at number three, St.David's Link (Behind Debenhams) in Cardiff City centre until October 14. Tracey added: "It's been brilliant to show close to home. The whole thing is really cutting edge. The idea that there is no place for art like this is ridiculous - there's a lot going on in South Wales and it feels good to be part of it." The rest of the exhibition is based at More Front Studios, Mortimer Road, Pontcanna, Cardiff. Tactile Bosch on Andrews Road, llandaff North. **For more information go to http://www.tactilebosch.org