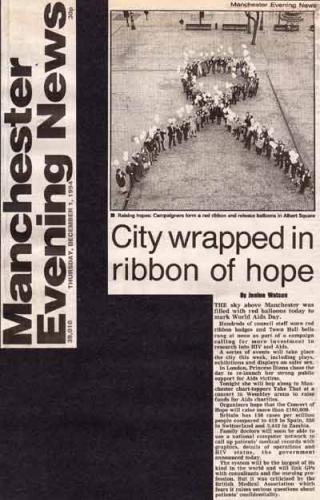 
Manchester Evening News -Tracey Sanders-Wood- City wrapped in ribbon of hope Thursday, December 1, 1994
The sky above Manchester was filled with red balloons toady to mark Worls Aids Day. Hundreds of council staff wore red ribbon badges and Town Hall bells rang at noon as part of a campaign calling for more investment in research into HIV and Aids. A series of events will take place in the city this weeek, including plays, exhibitions and dislays on safer sex. In London, Princess Diana choose the day to re-lauch her strong public support for Aids victims. Tonight she will bop along to Manchester chart-toppers Take That at a concert in Wembley arena to raise funds for Aids charities. Organisers hope that the concert of Hope will raise more than Ł100,000. Britain has 156 cases per million people compared to 619 in Spain, 538 in Switzerland and 3,442 in Zambia. Family doctors will soon be able to use a national computer network to call patients' medical records with graphics , details of operations and HIV status, the government announced today. The system will be the largest of its kind in the world and will link GP's with consultants and the nursing profession. But it was criticised by the British Medical Association which fears it raises serious questions about patients' confidentiality. PHOTOGRAPH: Raising hopes: Campaigners form a red ribbon and release balloons in Albert Square