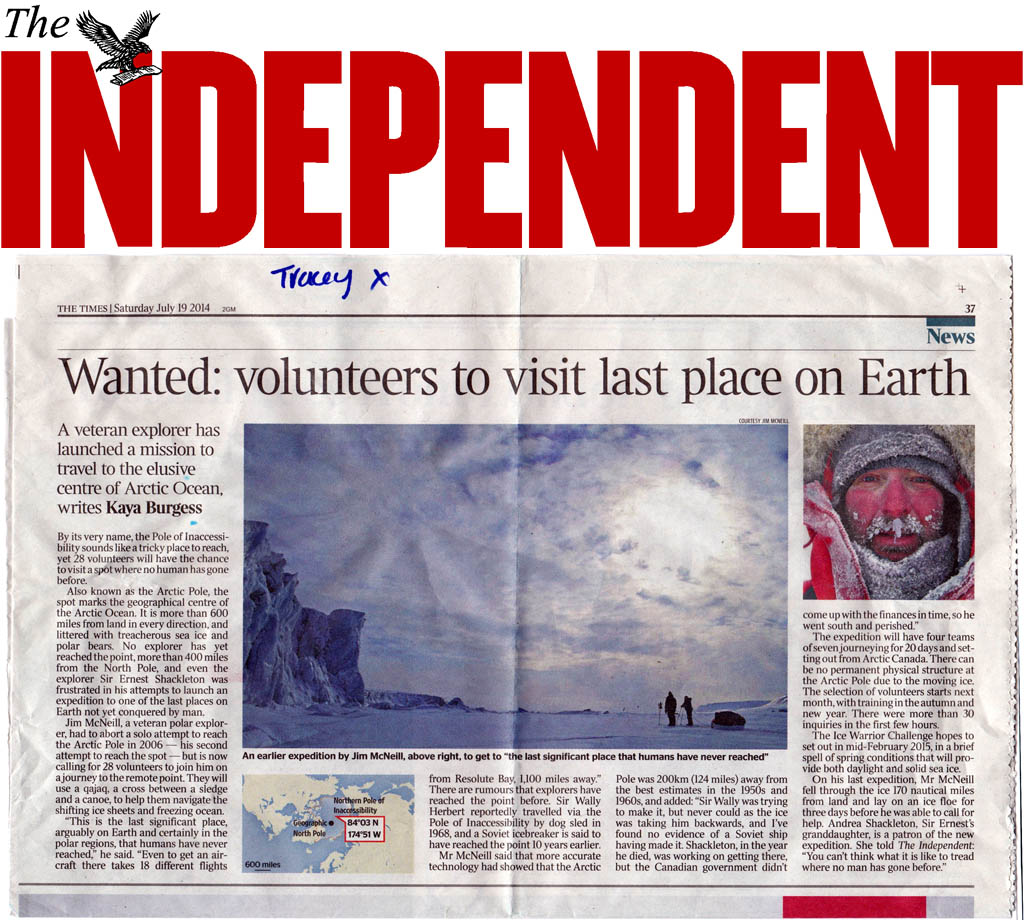 
The Independent Tracey Moberly Wanted: volunteers to visit last place on Earth A veteran explorer has launched a mission to travel to the elusive centre of Arctic Ocean, writes Kaya Burgess 19 July 2014
By its very name, the Pole of Inaccessibility sounds like a tricky place to reach, yet 28 volunteers will have the chance to visit a spot where no human has gone before. Also known as the Arctic Pole, the spot marks the geographical centre of the Arctic Ocean. It is more than 600 miles from land in every direction, and littered with treacherous sea ice and polar bears. No explorer has yet reached the poi nt, more than 400 miles from the North Pole, and even the explorer Sir Ernest Shackleton was frustrated in his attempts to launch an expedition to one of the last places on Earth not yet conquered by man. Jim McNeill, a veteran polar explorer, had to abort a solo attempt to reach the Arctic Pole in 2006 - his second attempt to reach the spot - but is now calling for 28 volunteers to join him on ajourney to the remote point. They will use a qajaq, a cross between a sledge and a canoe, to help them navigate the shifting ice sheets and freezing ocean. "This is the last significant place, arguably on Earth and certainly in the polar regions, that humans have never reached," he said. "Even to get an aircraft there takes 18 different flights from Resolute Bay, 1,100 miles away." There are rumours that explorers have reached the point before. Sir Wally Herbert reportedly travelled via the Pole of Inaccessibjlity by dog sled in 1968, and a Soviet icebreaker is said to have reached the point 10 years earlier. Mr McNeill said that more accurate technology had showed that the Arctic Pole was 200km (124 miles) away from the best estimates in the 1950s and 1960s, and added: "Sir Wally was trying to make it, but never could as the ice was taking him backwards, and I've found no evidence of a Soviet ship having made it. Shackleton, in the year he died, was working on getting there, but the Canadian government didn't come up with the finances in time, so he went south and perished." The expedition will have four teams ofsevenjourn yingfor20daysand setting out from Arctic Canada. There can be no permanent physical structure at the Arctic Pole due to the moving ice. The selection of volunteers starts next month, with training in the autumn and new year. There were more than 30 inquiries in the first few hours. The Ice Warrior Challenge hopes to set out in mid-February 2015, in a brief spell of spring conditions that will provide both daylight and solid sea ice. On his last expedition, Mr McNeill fell through the ice 170 nautical miles from land and lay on an ice floe for three days before he was able to call for help. Andrea Shackleton, Sir Ernest's granddaughter, is a patron of the new expedition. She told The independent: "You can't think what it is like to tread where no man has gone before." Caption: An earlier expedition by Jim McNeill, above right, to get to "the last significant place that humans have never reached" [link]