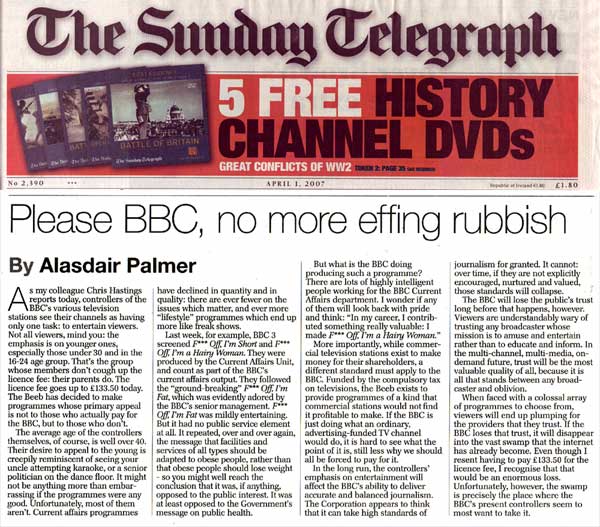 
Sunday Telegraph Tracey Moberly Please BBC, no more effing rubbish By Alasdair Palmer 12:01am BST 01/04/2007
As my colleague Chris Hastings reports today, controllers of the BBC's various television stations see their channels as having only one task: to entertain viewers. Not all viewers, mind you: the emphasis is on younger ones, especially those under 30 and in the 16-24 age group. That's the group whose members don't cough up the licence fee: their parents do. The licence fee goes up to Ł133.50 today. The Beeb has decided to make programmes whose primary appeal is not to those who actually pay for the BBC, but to those who don't. The average age of the controllers themselves, of course, is well over 40. Their desire to appeal to the young is creepily reminiscent of seeing your uncle attempting karaoke, or a senior politician on the dance floor. It might not be anything more than embarrassing if the programmes were any good. Unfortunately, most of them aren't. Current affairs programmes have declined in quantity and in quality: there are ever fewer on the issues which matter, and ever more "lifestyle" programmes which end up more like freak shows. advertisement Telegraph - Menswear/Shoes Last week, for example, BBC 3 screened F*** Off, I'm Short and F*** Off, I'm a Hairy Woman. They were produced by the Current Affairs Unit, and count as part of the BBC's current affairs output. They followed the "ground-breaking" F*** Off, I'm Fat, which was evidently adored by the BBC's senior management. F*** Off, I'm Fat was mildly entertaining. But it had no public service element at all. It repeated, over and over again, the message that facilities and services of all types should be adapted to obese people, rather than that obese people should lose weight - so you might well reach the conclusion that it was, if anything, opposed to the public interest. It was at least opposed to the Government's message on public health. But what is the BBC doing producing such a programme? There are lots of highly intelligent people working for the BBC Current Affairs department. I wonder if any of them will look back with pride and think: "In my career, I contributed something really valuable: I made F*** Off, I'm a Hairy Woman." More importantly, while commercial television stations exist to make money for their shareholders, a different standard must apply to the BBC. Funded by the compulsory tax on televisions, the Beeb exists to provide programmes of a kind that commercial stations would not find it profitable to make. If the BBC is just doing what an ordinary, advertising-funded TV channel would do, it is hard to see what the point of it is, still less why we should all be forced to pay for it. In the long run, the controllers' emphasis on entertainment will affect the BBC's ability to deliver accurate and balanced journalism. The Corporation appears to think that it can take high standards of journalism for granted. It cannot: over time, if they are not explicitly encouraged, nurtured and valued, those standards will collapse. The BBC will lose the public's trust long before that happens, however. Viewers are understandably wary of trusting any broadcaster whose mission is to amuse and entertain rather than to educate and inform. In the multi-channel, multi-media, on-demand future, trust will be the most valuable quality of all, because it is all that stands between any broadcaster and oblivion. When faced with a colossal array of programmes to choose from, viewers will end up plumping for the providers that they trust. If the BBC loses that trust, it will disappear into the vast swamp that the internet has already become. Even though I resent having to pay Ł133.50 for the licence fee, I recognise that that would be an enormous loss. Unfortunately, however, the swamp is precisely the place where the BBC's present controllers seem to most want to take it.