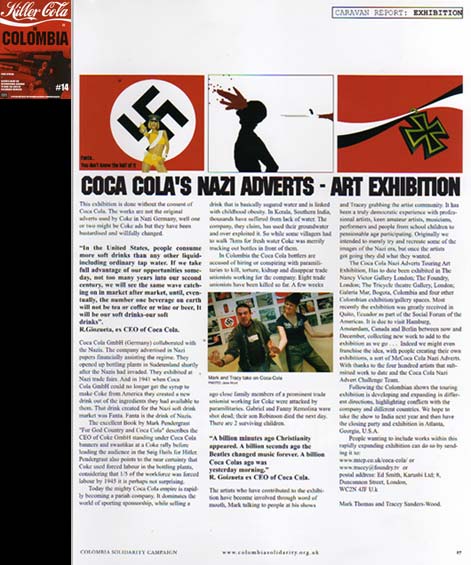 
KILLER COLA IN COLOMBIA Tracey Sanders-Wood COCA COLA'S NAZI ADVERTS - ART EXHIBITION #14 January 2005
This exhibition is done without the consent of Coca Cola. The works are not the original adverts used by Coke in Nazi Germany, well one or two might be Coke ads but they have been bastardised and willfully changed. "in the United States, people consume more soft drinks than any other liquid- including ordinary tap water. If we take full advantage of our opportunities someday, not too many years into our second century, we will see the same wave catching on in market after market, until, eventually, the number one beverage on earth will not be tea or coffee or wine or beer, It will be our soft drinks-our soft drinks." R.Giozueta, ex CEO of Coca Cola. Coca Cola GmbH (Germany) collaborated with the Nazis. The company advertised in Nazi papers financially assisting the regime. They opened up bottling plants in Sudetenland shortly after the Nazis had invaded. They exhibited at Nazi trade fairs. And in 1941 when Coca Cola GmbH could no longer get the syrup to make Coke from America they created a new drink out of the ingredients they had available to them. That drink created for the Nazi soft drink market was Fanta. Fanta is the drink of Nazis. The excellent Book by Mark Pendergrast "For God Country and Coca Cola" describes the CEO of Coke GmbH standing under Coca Cola banners and swastikas at a Coke rally before leading the audience in the Seig Heils for Hitler. Pendergrast also points to the near certainty that Coke used forced labour in the bottling plants, considering that 1/5 of the workforce was forced labour by 1945 it is perhaps not surprising. Today the mighty Coca Cola empire is rapidly becoming a pariah company. It dominates the world of sporting sponsorship, while selling a drink that is basically sugared water and is linked with childhood obesity. In Kerala, Southern India, thousands have suffered from lack of water. The company, they claim, has used their groundwater and over exploited it. So while some villagers had to walk 7kms for fresh water Coke was merrily trucking out bottles in front of them. In Colombia the Coca Cola bottlers are accused of hiring or conspiring with paramilitaries to kill, torture, kidnap and disappear trade unionists working for the company. Eight trade unionists have been killed so far. A few weeks ago close family members of a prominent trade unionist working for Coke were attacked by paramilitaries. Gabriel and Fanny Remolina were shot dead; their son Robinson died the next day. There are 2 surviving children. "A billion minutes ago Christianity appeared. A billion seconds ago the Beatles changed music forever. A billion Coca Colas ago was yesterday morning." R. Goizueta ex CEO of Coca Cola. The artists who have contributed to the exhibition have become involved through word of mouth, Mark talking to people at his shows and Tracey grabbing the artist community. It has been a truly democratic experience with professional artists, keen amateur artists, musicians, performers and people from school children to pensionable age participating. Originally we intended to merely try and recreate some of the images of the Nazi era, but once the artists got going they did what they wanted. The Coca Cola Nazi Adverts Touring Art Exhibition, Has to date been exhibited in The Nancy Victor Gallery London; The Foundry, London; The Tricycle theatre Gallery, London; Galeria Mar, Bogota, Colombia and four other Colombian exhibition/gallery spaces. Most recently the exhibition was greatly received in Quito, Ecuador as part of the Social Forum of the Americas. It is due to visit Hamburg, Amsterdam, Canada and Berlin between now and December, collecting new work to add to the exhibition as we go . . . Indeed we might even franchise the idea, with people creating their own exhibitions, a sort of McCoca Cola Nazi Adverts. With thanks to the four hundred artists that submitted work to date and the Coca Cola Nazi Advert Challenge Team. Following the Colombian shows the touring exhibition is developing and expanding in different directions, highlighting conflicts with the company and different countries. We hope to take the show to India next year and then have the closing party and exhibition in Atlanta, Georgia, U.S.A. People wanting to include works within this rapidly expanding exhibition can do so by writing to tracey or postal address: Ed Smith, Karushi Ltd; 8, Duncannon Street, London, WC2N 4JF U.k Mark Thomas and Tracey Sanders-Wood.