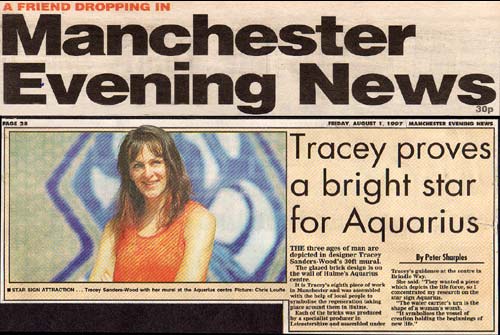 
Manchester Evening News -Tracey Sanders-Wood- Tracey proves a bright star for Aquarius Friday August 1 1997 by Peter Sharples
The three ages of man are depicted in designer Tracey Sanders-Wood's 30ft mural. The glazed brick design is on the wall of Hulme's Aquarius centre. it is Tracey's eighth piece of work in Manchester and was assembled with the help of local people to symbolise the regeneration taking place around them in Hulme. Each of the bricks were produced by the artist and young members of the community in Leicestershire and assembled under Tracey's guidence at the centre in Brindle way. She said: "They wanted a piece which depicts life force, so I concentrated my research on the start sign Aquarius. "The water carrier's urn is the shape of a woman's womb. "It symbolises the vessel of creation holding the beginnings of new life." PHOTOGRAPH: STAR SIGN ATTRACTION ... Tracey Sanders-Wood with her mural at the Aquarius Centre: Chris Loufte