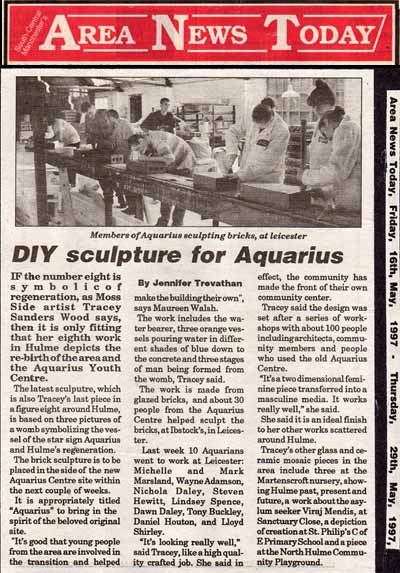 
Area News Today -Tracey Sanders-Wood- DIY Sculpture for Aquarius Friday 16th May 1997 by Jennifer Trevathan
If the number eight is symbolic of regeneration, as Moss Side artist Tracey Sanders-Wood says, then it is only fitting that her eighth work in Hulme depicts the re-birth of the area and the Aquarius Youth Centre. The latest sculpture, which is also Tracey's last piece in the figure eight around Hulme, is based on three pictures of a womb symbolizing the vessel of the star sign Aquarius and Hulme's regeneration. The brick sculpture is to be place in the side of the new Aquarius Centre site within the next couple of weeks. It is appropriately titled "Aquarius" to bring in the spirit of the beloved original site. "It's good that young people from the area are involved in the transition and helped make the building their own," says Maureen Walsh. The work includes the water bearer, three orange vessels pouring water in different shades of blue down to the concrete and three stages of man being formed from the womb, Tracey said. The work is made from glazed bricks, and about 30 people from the Aquarius Centre helped sculpt the bricks, at Ibstock's, in Leicester. Last week 10 Aquarians went to work at Leicester: Michelle and Mark Marsland, Wayne Adamson, Nichola Daley, Steven Hewitt, Lindsey Spence, Dawn Daley, Tony Buckley, Daniel Houton and Lloyd Shirely. "It's looking really well," said Tracey, like a high quality crafted job. She said in effect, the community has made the front of their own community centre. Tracey said the design was set after a series of work-shops with about 100 people including architects, community members and people who used the old Aquarius Centre. "It's a two dimensional feminine piece transfered into a masculine media. It works really well," she said. She said it is an ideal finish to her other works scattered around Hulme. Tracey's other glass and ceramic mosaic pieces in the area include three at the Martenscroft nursery, showing Hulme past, present and future, a work about asylum seeker Viraj mendis, at Sanctuary Close, a depiction of Creation at St. Phillip's C of E Primary School and a piece at the North Hulme Community Playground. PHOTOGRAPH: Members of Aquarius sculpting bricks, at leicester