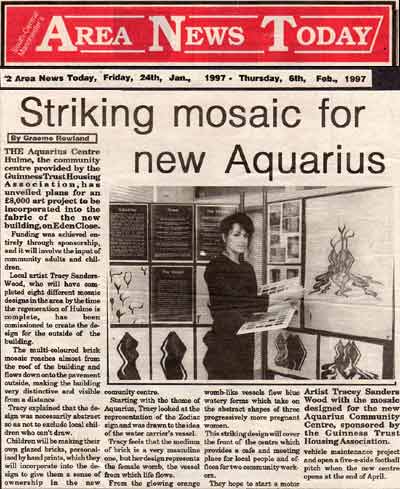 
Area News Today -Tracey Sanders-Wood- Striking mosaic for new Aquarius Friday, 24th January by Graeme Rowland
The aquarius Centre Hulme, the community centre provided by the Guinness trust Housing Association, has unveiled plans for an Ł8,000 art project to be incorporated into the fabric of the new building, on Eden Close. Funding was achieved entirely through sponsorship, and it will involve the input of community adults and children. Local artist Tracey sanders-Wood, who will have completed eight different mosaic designs in the area by the time of the regeneration of Hulme is complete, has been commissioned to create the design for the outside of the building. The multi-coloured brick work reaches almost from the roof of the building and flows down onto the pavement outside, making the building very distinctive and visible from a distance. Tracey explained that the design was necessarily abstract so as to not exclude local children who can't draw. Children will be making their own glazed bricks, personalised by hand prints, which they will incorporate into the design to give them a sense of ownership in the new community centre. Starting with the theme of Aquarius, Tracey looked at the representation of the zodiac sign and was drawn to the idea of the water carrier's vessel. Tracey feels that the medium of brick is a very masculine one, but her design represents the female womb, the vessel from which life flows. From the glowing orange womb-like vessels flow blue watery forms which take on the abstract shapes of three progressively more pregnant women. The striking design will cover the front of the centre which provides a cafe and meeting place for local people and offices for two community workers. They hope to start a motor vehicle maintenance project and open a five-a-side football pitch when the new centre opens at the end of April.