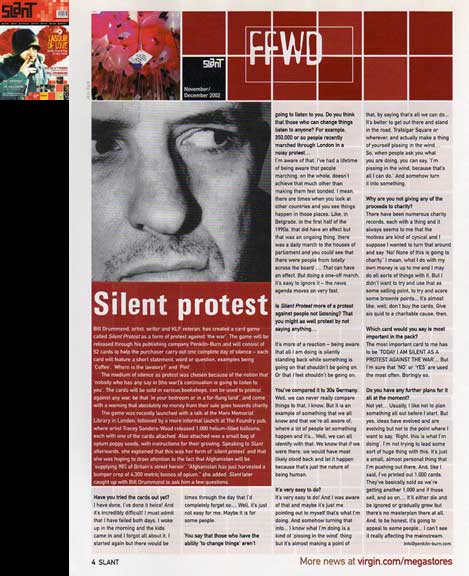 
SLANT Tracey Sanders-Wood Silent protest November-December/02
Bill Drummond, artist, writer and KLF veteran, has created a card game called Silent Protest as a form of a protest against the war. the game will be released through his publishing company Penkiln-Burn and will consist of 52 cards to help the purchaser carry out one complete day of silence - each card will feature a short statement, word or question, examples being 'Coffee', 'Where is the lavatory?' and 'pint'. The medium of silence as protest was chosen because of the notion that nobody who has any say in [the war]'s continuation is going to listen to you. The cards will be sold in various bookshops, can be used to protest against any war, be that 'in your bedroom or in a far-flung land', and come with a warning that absolutely no money from their sale goes towards charity. The game was recently launched with a talk at the Marx Memorial Library in London, followed by a more informal launch at the Foundry Pub, where artist Tracey sanders-Wood released 1,000 hellium filled balloons, each one with a card attached. Also attached was a small bag of opium poppy seeds, with instructions for their growing. Speaking to SLANT afterwards she explained that Bill Commissioned her to do her form of 'Silent Protest' and that she was hoping to draw attention to the fact that Afghanistan will be supplying 98% of Britains street heroin. "Afghanistan has just harvested 4,300 metric tonnes of opium," she added . SLANT later caught up with Bill Drummond to ask him a few questions. Interview continues. . . . . . . . . . PHOTOGRAPH: of Tracey's work by Jess Hurd