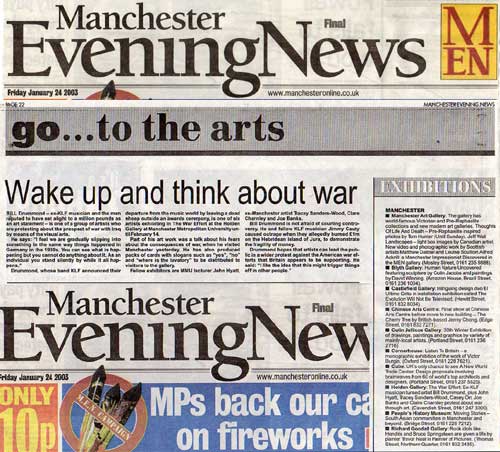 
MANCHESTER EVENING NEWS Tracey Sanders-Wood Wake up and think about war Friday January 24 2003
Bill Drummond - ex-KLF musician and the man reputed to have set alight to a million pounds as an art statement - is one of a group of artists who are protesting about war with Iraq by means of the visual arts. He says: "I feel we are gradually slipping into something in the same way things happened in Germany in the 1930's. You can see what is happening but you cannot do anything about it. As an individual you stand silently by while it all happens." Drummond, whose band KLF announced their departure from the music world by leaving a dead sheep outside an awards ceremony, is one of six artists exhibiting in The War Effort at the Holden Gallery Manchester Metropolitan University til february 14. Part of his work was a talk about his fears about the consequences of war, when they visited Manchester yesterday. He has also produced packs of cards with slogans such as "yes", "no" and "where is the lavatory" to be distributed to visitors at the gallery. Fellow exhibitors are MMU lecturer John Hyatt, ex-Manchester artist Tracey sanders-Wood, Clare Charnley and Joe Banks. Bill drummond is not afraid of courting controversy. he and fellow KLF musician Jimmy Cauty caused outrage when they allegedly burned Ł1m on the Hebridean island of Jura, to demonstrate the fragility of money. Drummond hopes that artists can lead the public in a wider protest against the american war efforts that Britain appears to be supporting. he said: "I like the idea that this might trigger things off in other people."