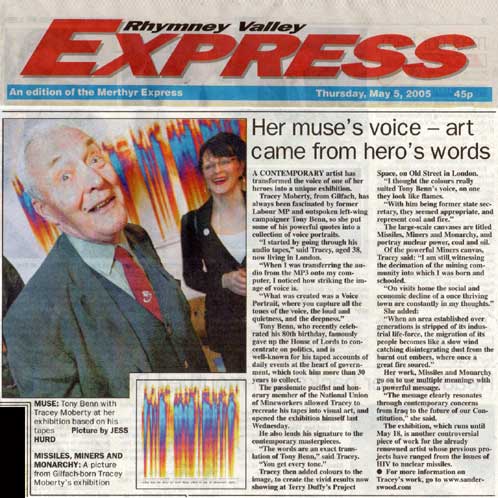 
Rhymney Valley Express Tracey Sanders-Wood Her Muse's voice - art came from hero's words Thursday May 5th 2005
A CONTEMPORARY artist has transformed the voice of one of her heros into a unique exhibition. Tracey Moberly, from Gilfach, has always been fascinated by former Labour MP and out spoken left-wing campaigner Tony Benn, so she put some of his powerful quotes into a collection of voice portraits. "I started by going through his audio tapes," said Tracey, aged 38, now living in London. "When I was transferring the audio from the MP3 onto my computer, I noticed how striking the image of voice is. What was created was a Voice Portrait, where you can capture all the tones of the voice, the loud and quietness, and the deepness." Tony Benn, who recently celebrated his 80th birthday, famously gave up the House of Lords to concentrate on politics, and is well known for his taped accounts of daily events at the heart of Government, which took him more than 30 years to collect. The passionate pacifist and honorary member of the National Union of Mineworkers allowed Tracey to recreate his tapes into visual art, and opened the exhibition himself last Wednesday. He also lends his signature to the contemporary masterpieces. "The words are an exact translation of Tony Benn," said Tracey. "You get every tone." Tracey then added colours to the image, to create the vivid results now showing at Terry Duffy's Project Space, on Old Street in London. "I thought the colours really suited Tony Benn's voice, on one they look like flames. With him being the former State Secretary (for power - ed), they seemed appropriate, and represent coal and fire." The large scale canvases are titled Missiles, Miners and Monarchy, and portray nuclear power, coal and oil. Of the powerful Miners canvas Tracey said: "I am still witnessing the decimation of the mining community into which I was born and schooled. On visits home the social and economic decline of a once thriving town are constantly in my thoughts." She added: "When an area established over generations is stripped of its industrial life-force, the migration of its people becomes like a slow wind catching disintegrating dust from the burnt out embers, where once a great fire soared." Her work, Missiles and Monarchy go on to use multiple meanings with a powerful message. The message clearly resonates through contemporary concerns from Iraq to the future of our Constitution," she said. The exhibition, which runs until May 18, is another controversial piece of work for the already renowned artist whose previous projects have ranged from the issues of HIV to nuclear missiles. For more information on Tracey's work, go to www.sanderswood.com