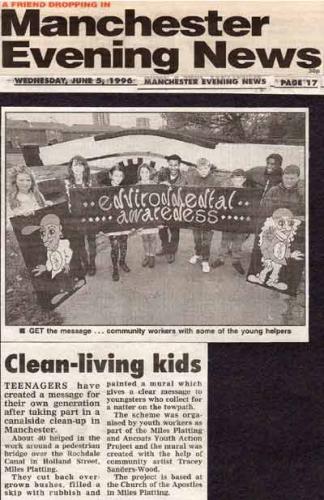 
Manchester Evening News -Tracey Sanders-Wood- Clean-living kids Wednesday June 5 1996
TEENAGERS have created a message for their own generation after taking part in a canalside clean-up in Manchester. About 40 helped in the work around a pedestrian bridge over the Rochdale Canal in Holland Street, Miles Platting. They cut back over-grown bushes, filled a skip with rubbish and painted a mural which gives a clear message to youngsters who collect for a natter on the towpath. The scheme was organised by youth workers as part of the Miles Platting and Ancoats Youth Action Project and the mural was created with the help of community aartist Tracey sanders-Wood. The project is based in the Church of the Apostles in Miles Platting Photograph: GET thew message . . . community workers with some of the helpers