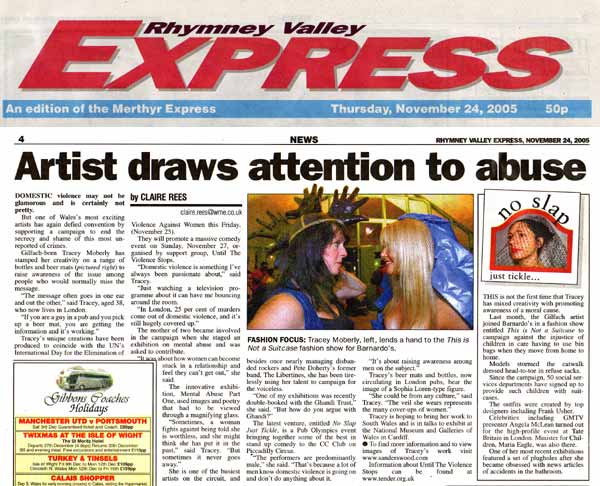 
Rhymney Valley Express Tracey Sanders-Wood Artist draws attention to abuse by Claire Rees Thursday November 24, 2005
DOMESTIC violence may not be glamorous and is certainly not pretty. But one of Wales's most exciting artists has again defied convention by supporting a campaign to end the secrecy and shame of this most unreported of crimes. Gilfach born Tracey Moberly has stamped her creativity on a range of bottles and beer mats (pictured right) to raise awareness of the issue among people who would normally miss the message. "The message often goes in one ear and out the other," said Tracey who now lives in London. "If you are a guy in a pub and you pick up a beer mat, you are getting the information and it's working." Tracey's unique creations have been produced to coincide with the UN's International Day for the Elimination of Violence Against women this Friday, (November 25). They will promote a massive comedy event on Sunday 27, organised by support group, Until The Violence Stops. "Domestic violence is something I've always felt passionate about," said Tracey. "Just watching a television programme about it can have me bouncing around the room. In London, 25 percent of murders come out of domestic violence, and it's still covered up." The mother of two became involved in the campaign when she staged an exhibition on mental abuse and was asked to contribute. "It was about how women can become stuck in a relationship and feel they can't get out, she said. The innovative exhibition, Mental Abuse Part One, used images and poetry that had to be viewed through a magnifying glass. "Sometimes, a woman fights against being told she is worthless, and she might think she has put it in the past," said Tracey. "But sometimes it never goes away." She is one of the busiest artists on the circuit, and besides once nearly managing disbanded rockers and Pete Doherty's former band, The Libertines, she has been tirelessly using her talent to campaign for the voiceless. "one of my exhibitions was recently double-booked with the Ghandi Trust," she said, "But how do you argue with Ghandi?" The latest venture, entitled No Slap Just Tickle, is a pub Olympics event bringing together some of the best in stand up comedy to the CC Club on Piccadilly Circus. "The performers are predominantly male," she said. "That's because a lot of men know domestic violence is going on and don't do anything about it. "It's about raising awareness among men on the subject." Tracey's beer mats and bottles, now circulating in London pubs, bear the image of a Sophie Loren-type figure. "She could be from any culture," said Tracey. "The veil she wears represents the many cover-ups of women." Tracey is hoping to bring her work to South wales and is in talks to exhibit at the National museum and galleries of Wales in Cardiff. To find more information and to view images of Tracey's work visit www.sanderswood.com. Information about Until The Violence Stops can be found at www.tender.org.uk No Slap just tickle... This is not the first time that tracey has mixed creativity with promoting awareness of a moral cause. Last month, the Gilfach born artist joined Barnardo's in the fashion show entitled This is not a suitcase to campaign against the injustice of children in care having to use bin bags when they move from home to home. Models stormed the catwalk dressed head-to-toe in refuse sacks. Since the campaign, 50 social service departments have signed up to provide such children with suitcases . The outfits were created by top designers including Frank Usher. Celebrities including GMTV presenter Angela McLean turned out for the high-profile event at the Tate Britain in London. Minister for Children, Maria eagle, was also there. One of her most recent exhibitions featured a set of plugholes after she became obsessed with news articles of accidents in the bathroom. Photo: (c) Jess Hurd Fashion Focus: Tracey Moberly, left, lends a hand to the 'This is Not A Suitcase' fashion show for Barnardo's.