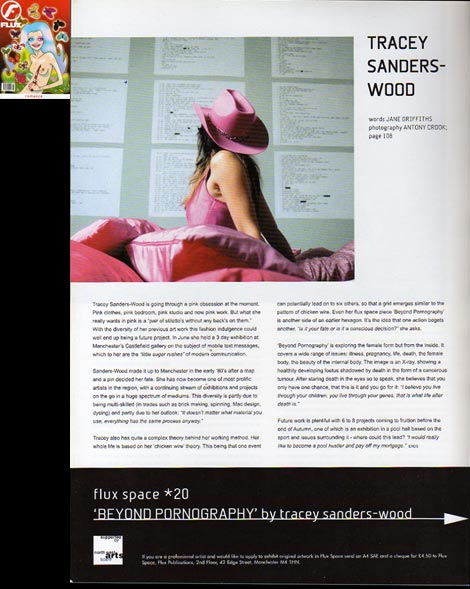 
FLUX MAGAZINE -Tracey Sanders-Wood- 'BEYOND PORNOGRAPHY' August - September 2000
Trcaey Sanders-Wood is going through a pink obsession at the moment. Pink clothes, pink bedroom, pink studio and now pink work. But what she really wants is a pink 'pair of stilettoes without any backs on them.' With the diversity of her previous art work this fashion indulgence could well end up being a future project. In June she held a 3 day exhibition at Manchester's Castlefield gallery on the subject of mobile text messages, which to her are the 'little sugar rushes' of modern communication. Sanders-Wood made it up to Manchester in the early 80's after a map and a pin decided her fate. She has now become one of the most prolific artists in the region, with a continuing stream of exhibitions and projects on the go in a huge spectrum of mediums. The diversity is partly due to being multi-skilled (In trades such as brick making, spinning, Mac design, dyeing) and partly due to her outlook: "It doesn't matter what material you use, everything has the same process anyway." Tracey also has quite a complex theory behind her working method. Her whole life is based on her 'chicken wire' theory. This being that one event can potentially lead on to six others, so that a grid emerges similar to the pattern of chicken wire. Even her Flux space piece 'Beyond Pornography' is another side of her hexagon. It's the idea that one action begets another. "Is it your fate or is it a conscious decision?" she asks. 'Beyond Pornography' is exploring the female form but from the inside. It covers a wide range of issues: illness, pregnancy, life, death, the female body, the beauty of the internal body. The image is an X-ray, showing a healthily developing foetus shadowed by death in the form of a cancerous tumour. After staring death in the eyes so to speak, she believes that you only have one chance, that is it and you go for it: "I believe you live through your children, you live through your genes, that is what life after death is." Future work is plentiful with 6 to 8 projects coming to fruition before the end of Autumn, one of which is an exhibition in a pool hall based on the sport and issues surrounding it - where could this lead? "I would really like to become a pool hustler and pay off my mortgage." flux space*20 'BEYOND PORNOGRAPHY' by tracey sanders-wood