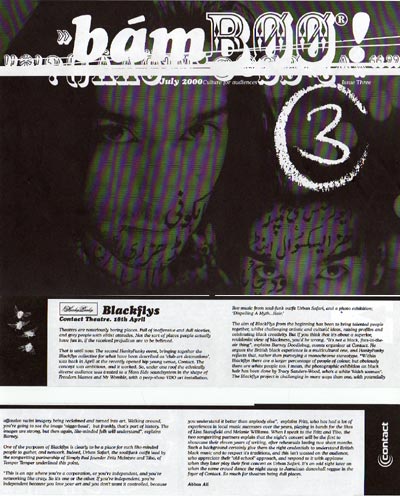 
BAMBOO -Tracey Sanders-Wood- HankyPanky: Blackflys Contact Theatre July 2000 by Abbas Ali
Theatres are notoriously boring places. Full of inoffensive and dull niceties, and grey people with elitist attitudes. Not the sort of places people actually have fun in, if the received prejudices are to be believed. That is until now. The second HankyPanky event, bringing together the Blackflys collective for what have been described as 'club-art detonations', was back in April at the recently opened hip young venue, Contact. The concept was ambitious, and it worked. So, under one roof the ethnically diverse audience was treated to a Moss Side sound system in the shape of Freedom Masses and Mr. Womble, with a peep show VDO art installation, live music from soul-funk outfit Urban Safari, and a photo exhibition; 'Dispelling A Myth...Hair.' The aim of Blackflys from the beginning has been to bring talented people together, whilst challenging artistic and cultural ideas, raising profiles and celebrating black creativity. But if you think that it's about a superior, revisionist view of blackness, you'd be wrong. "It's not a black, fists-in-the-air thing", explains Barney Doodlebug, events organiser at Contact. He argues the British Black experience is a multicultural one, and HankyPanky reflects that, rather than purveying a monochrome stereotype. "Within Blackflys there are a larger percentage of people of colour, but obviously there are white people too. I mean, the photographic exhibition on black hair has been done by Tracey sanders-Wood, who's a white Welsh woman". "The Blackflys project is challenging in more ways than one, with potentially offensive racist imagery being reclaimed and turned into art. Walking around, you're going to see the image 'niggerhead', but frankly, that's part of history. The images are strong, but then again, like-minded folk will understand", explains Barney. One of the purposes of the Blackflys is clearly to be a place for such like-minded people to gather, and network. Indeed, Urban Safari, the soul/funk outfit lead by the songwriting partnership of Simply Red founder Fritz McIntyre and Tibo, of Temper Temper underlined this point. "This is an age where you're a corporation, or you're independent, you're independent because you love your art and you don't want it controlled, because you understand it better than anybody else",explains Fritz, who has had a lot of experiences in local music successes over the years, playing in bands for the likes of Lisa Stansfield and Melanie Williams. When I speak to the Frtz and Tibo, the two song writing partners explain that the night's concert will be the first to showcase their eleven years of writing, after rehearsals lasting two short months. Such a background certainly give them the right credentials to understand British black music and to respect it's traditions, and this isn't wasted on the audience, who appreciate their "old-school" approach, and respond to it with applause when they later play their first concert as Urban safari. It's an odd sight later on when the same crowd dance the night away to Jamaican dancehall reggae in the foyer of Contact. So much for theatres being dull places.