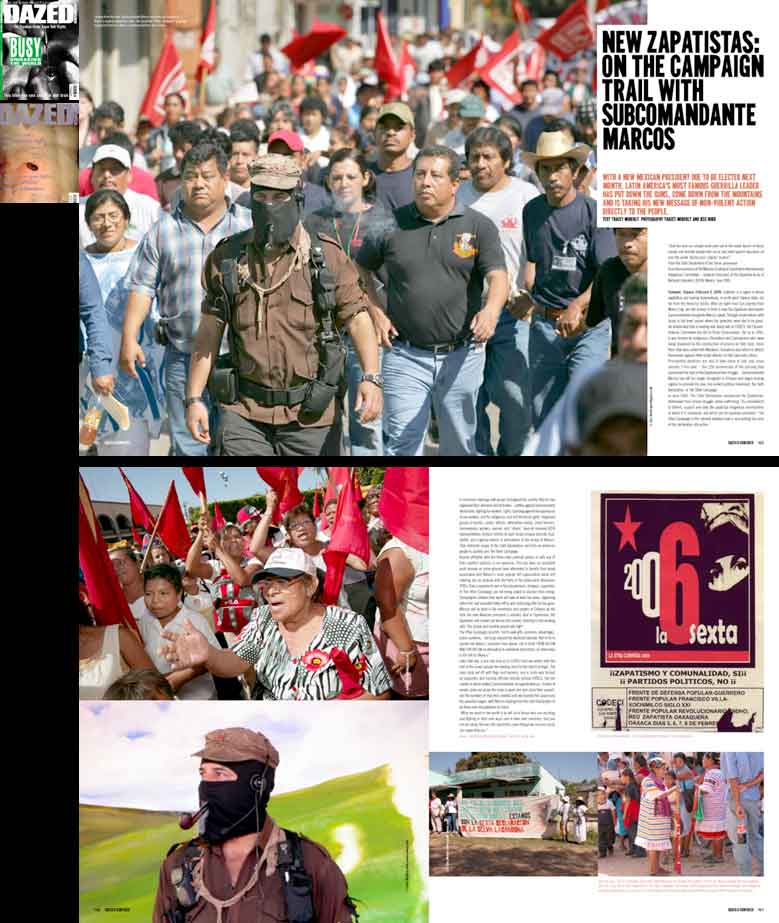 
DAZED & CONFUSED Tracey Moberly NEW ZAPATISTAS: ON THE CAMPAIGN TRAIL WITH SUBCOMANDANTE MARCOS With a new Mexican president due to be elected next month, Latin America's most famous guerrilla leader has put down the guns, come down from the mountains and is taking his new message of non-violent action directly to the people. Text Tracey Moberly, Photography Tracey Moberly and Jess Hurd July 2006
"And this was our simple word sent out to the noble hearts of those simple and humble people who resist and rebel against injustices all over the world. Democracy! Liberty! Justice!" From the Sixth Declaration of the Selva Lacandona; from the mountains of the Mexican Southeast Clandestine Revolutionary Indigenous Committee - General Command of the Zapatista Army of National Liberation (IZLN) Mexico, June 2005 Tuxtepec, Oaxaca, February 5, 2006: Tuxtepec is a region of dense vegetation and soaring temperatures, in north-west Oaxaca state, not far from the Veracruz border. After an eight hour bus journey from Mexico City, we had arrived in time to hear the Zapatista rebel leader Subcomandante Insurgentre Marcos speak. Through conversations with locals in the town square where the speeches were due to be given, we established that a meeting was being held at CODECI, the Citizens' Defence Committee and Aid to Rural Communities. Set up in 1996, it was formed by indigenous Chinanteco and Campesinos who were being displaced by the construction of prisons on their land. Since then, they have united with Mazatecs, Cuicatecos and others to defend themselves against often brutal attacks on their land and culture. Presidential elections are due to take place in July, and since January 2 this year - the 12th anniversary of the uprising that announced the start of the Zapatista armed struggle - Subcomandante Marcos has left his jungle stronghold in Chiapas and begun touring regions to promote his new, non-violent political movement, the Sixth Declaration, or The Other Campaign. In June 2005, The Sixth Declaration announced the Zapatistas' withdrawal from armed struggle, while reaffirming "its commitment to defend, support and obey the zapatista indigenous communities of which it is composed, and which are its supreme command." The Other Campaign is the national initiative that is now putting the aims of this declaration into action. In numerous meetings with groups throughout the country, Marcos has registered their demands and activities - battles against environmental destruction, fighting for workers' rights, standing against the oppression of sex workers, and for indigenous civil and territorial rights. Organised groups of youths, punks, leftists, alternative media, small farmers, homosexuals, workers, women, and "others" have all received EZLN representatives. Activist centres at each locale prepare security, food, shelter, and organise events in anticipation of the arrival of Marcos. They distribute copies of the Sixth Declaration, and form an arena for people to publicly join The Other Campaign. Anyone affiliated with the three main political parties or with any of their coalition partners is not welcome. This has been an important point already as some groups have attempted to benefit from being associated with Mexico’s most popular left organisation while still entering into an alliance with the Party of the Democratic Revolution (PRD), that is expected to win in the July elections. However, supporters of The Other Campaign are not being asked to abstain from voting. Campaigners believe their work will take at least ten years, beginning before the next president takes office and continuing after he has gone. Marcos will be back in the mountains and jungles of Chiapas by the time the next Mexican president is elected. And in September, the Zapatistas will spread out across the country, listening to and working with "the simple and humble people who fight". The Other Campaign commits "not to seek gifts, positions, advantages, public positions... but to go beyond the electoral calendar. Not to try to resolve the Nation’s problems from above, but to build FROM BELOW AND FOR BELOW an alternative to neoliberal destruction, an alternative to the left for Mexico." Later that day, a bus ride took us to CODECI and we waited with the rest of the crowd outside the meeting room for the march to begin. The main body set off with flags and banners, and a circle was formed by supporters and security officials directly outside CODECI, into the middle of which walked Subcomandante Insurgente Marcos. Crowds of people came out along the route to greet him and show their support, and the numbers of marchers swelled until we reached the square and the speeches began, with Marcos reading from the Sixth Declaration to all those who had gathered to listen. "What we want in the world is to tell all of those who are resisting and fighting in their own ways and in their own countries, that you are not alone, that we, the Zapatistas, even though we are very small, are supporting you." http://www.zeztainternazional.ezln.org.mx CAPTIONS... Leading from the front: Subcomandante Marcos marches into Tuxtepec in Mexico's majority indigenous state. The Zapatistas "Other Campaign" is gaining support in Oaxaca as Mexico's national elections draw closer (© Jess Hurd/reportdigital.co.uk). Poster boy for the revolution: "Yes to Zapatism and community, no to party politics" Opposite page. Top left: Supporters come out to greet Marcos as he marches into Tuxtepec (© Jess Hurd/reportdigital.co.uk); bottom left: Marcos onstage with his trademark pipe (© Tracey Moberly/www.sanderswood.com). This page. Below right: Supporters of “The Other Campaign” wait outside CODECI preparing for the march into Tuxtepec with indigenous women in traditional dress; below left: The first banner of the march as Subcomandante Marcos leaves CODECI to march into Tuxtepec (© Tracey Moberly/www.sanderswood.com )