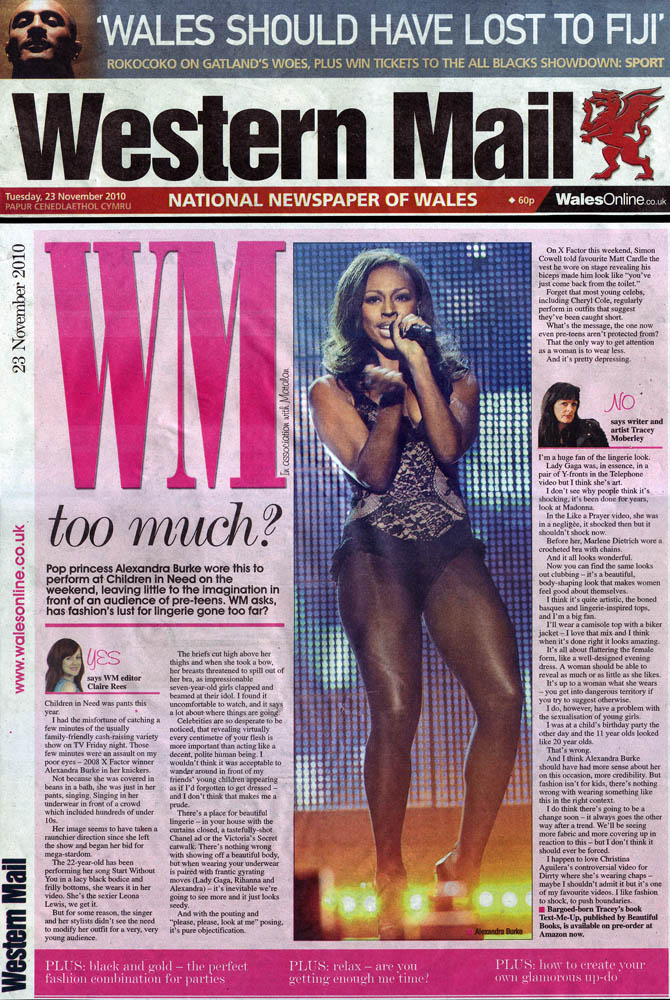 
Western Mail Tracey Moberly Has the fashion for lingerie gone too far? 23 November 2010
Yes, says WM editor Claire Rees Children in Need was pants this year. I had the misfortune of catching a few minutes of the usually family-friendly cash-raising variety show on TV Friday night. Those few minutes were an assault on my poor eyes - 2008 X Factor winner Alexandra Burke in her knickers. Not because she was covered in beans in a bath, she was just in her pants, singing. Singing in her underwear in front of a crowd which included hundreds of under 10s. Her image seems to have taken a raunchier direction since she left the show and began her bid for mega-stardom. The 22-year-old has been performing her song Start Without You in a lacy black bodice and frilly bottoms, she wears it in her video. She's the sexier Leona Lewis, we get it. But for some reason, the singer and her stylists didn't see the need to modify her outfit for a very, very young audience. The briefs cut high above her thighs and when she took a bow, her breasts threatened to spill out of her bra, as impressionable seven-year-old girls clapped and beamed at their idol. I found it uncomfortable to watch, and it says a lot about where things are going. Celebrities are so desperate to be noticed, that revealing virtually every centimetre of your flesh is more important than acting like a decent, polite human being. I wouldn't think it was acceptable to wander around in front of my friends' young children appearing as if I'd forgotten to get dressed - and I don't think that makes me a prude. There's a place for beautiful lingerie - in your house with the curtains closed, a tastefully-shot Chanel ad or the Victoria's Secret catwalk. There's nothing wrong with showing off a beautiful body, but when wearing your underwear is paired with frantic gyrating moves (Lady Gaga, Rihanna and Alexandra) - it's inevitable we're going to see more and it just looks seedy. And with the pouting and "please, please, look at me" posing, it's pure objectification. On X Factor this weekend, Simon Cowell told favourite Matt Cardle the vest he wore on stage revealing his biceps made him look like "you've just come back from the toilet." Forget that most young celebs, including Cheryl Cole, regularly perform in outfits that suggest they've been caught short. What's the message, the one now even pre-teens aren't protected from? That the only way to get attention as a woman is to wear less. And it's pretty depressing. No, says writer and artist Tracey Moberly I'm a huge fan of the lingerie look. Lady Gaga was, in essence, in a pair of Y-fronts in the Telephone video but I think she's art. I don't see why people think it's shocking, it's been done for years, look at Madonna. In the Like a Prayer video, she was in a negligee, it shocked then but it shouldn't shock now. Before her, Marlene Dietrich wore a crocheted bra with chains. And it all looks wonderful. Now you can find the same looks out clubbing - it's a beautiful, body-shaping look that makes women feel good about themselves. I think it's quite artistic, the boned basques and lingerie-inspired tops, and I'm a big fan. I'll wear a camisole top with a biker jacket - I love that mix and I think when it's done right it looks amazing. It's all about flattering the female form, like a well-designed evening dress. A woman should be able to reveal as much or as little as she likes. It's up to a woman what she wears - you get into dangerous territory if you try to suggest otherwise. I do, however, have a problem with the sexualisation of young girls. I was at a child's birthday party the other day and the 11 year olds looked like 20 year olds. That's wrong. And I think Alexandra Burke should have had more sense about her on this occasion, more credibility. But fashion isn't for kids, there's nothing wrong with wearing something like this in the right context. I do think there's going to be a change soon - it always goes the other way after a trend. We'll be seeing more fabric and more covering up in reaction to this - but I don't think it should ever be forced. I happen to love Christina Aguilera's controversial video for Dirrty where she's wearing chaps - maybe I shouldn't admit it but it's one of my favourite videos. I like fashion to shock, to push boundaries. Bargoed-born Tracey's book Text-Me-Up, published by Beautiful Books, is available on pre-order at Amazon now. article: link