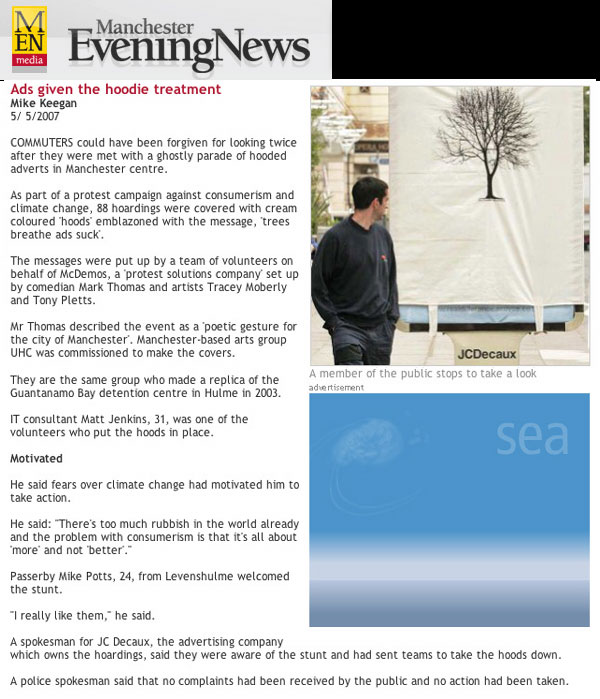 
Manchester Evening News MEN media Tracey Moberly Ads given the Hoodie Treatment Mike Keegan 5 May 2007
COMMUTERS could have been forgiven for looking twice after they were met with a ghostly parade of hooded adverts in Manchester centre. As part of a protest campaign against consumerism and climate change, 88 hoardings were covered with cream coloured 'hoods' emblazoned with the message, 'trees breathe ads suck'. The messages were put up by a team of volunteers on behalf of McDemos, a 'protest solutions company set up by comedian Mark Thomas and artists Tracey Moberly and Tony Pletts. Mr Thomas described the event as a 'poetic gesture for the city of Manchester. Manchester--based arts group UHC was commissioned to make the covers. They are the same group who made a replica of the Guantanamo Bay detention centre in Hulme in 2003. IT consultant Matt Jenkins, 31, was one of the volunteers who put the hoods in place. Motivated He said fears over climate change had motivated him to take action. He said: 'There's too much rubbish in the world already and the problem with consumerism is that it's all about `more' and not 'better'.` Passerby Mike Potts, 24, from Levenshulme welcomed the stunt. 'I really like them,' he said. A spokesman for JC Decaux, the advertising company which owns the hoardings, said they were aware of the stunt and had sent teams to take the hoods down. A police spokesman said that no complaints had been received by the public and no action had been taken.