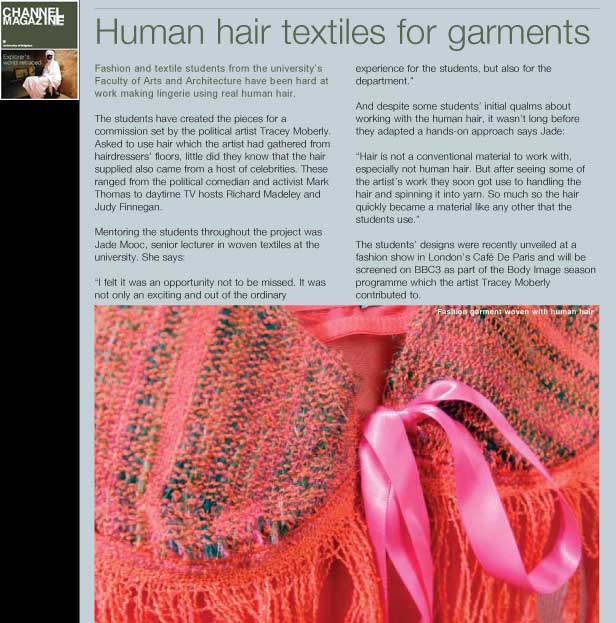 
Channel Magazine University of Brighton Tracey Moberly Human hair textiles for garments March-April 2007
Fashion and textile students from the university's Faculty of Arts and Architecture have been hard at work making lingerie using real human hair. The students have created the pieces for a commission set by the political artist Tracey Moberly. Asked to use hair which the artist had gathered from hairdressers' floors, little did they know that the hair supplied also came from a host of celebrities. These ranged from the political comedian and activist Mark Thomas to daytime TV hosts Richard Madeley and Judy Finnegan. Mentoring the students throughout the project was Jade Mooc, senior lecturer in woven textiles at the university. She says: "I felt it was an opportunity not to be missed. It was not only an exciting and out of the ordinary experience for the students, but also for the department." And despite some students' initial qualms about working with the human hair, it wasn't long before they adapted a hands-on approach says Jade: "Hair is not a conventional material to work with, especially not human hair. But after seeing some of the artist's work they soon got use to handling the hair and spinning it into yarn. So much so the hair quickly became a material like any other that the students use." The students' designs were recently unveiled at a fashion show in London's Cafe De Paris and will be screened on BBC3 as part of the Body Image season programme which the artist Tracey Moberly contributed to.