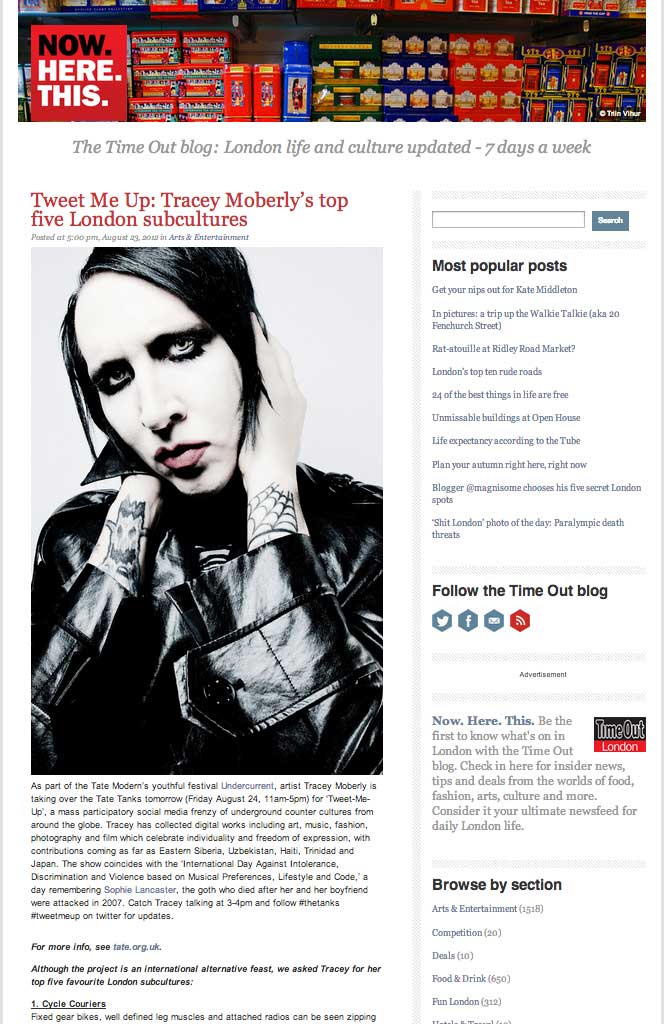 
Time Out Now. Here. This. Tracey Moberly Tweet Me Up: Tracey Moberly's top five London subcultures link by Tracey Moberly 23 August 2012
As part of the Tate Modern’s youthful festival Undercurrent, artist Tracey Moberly is taking over the Tate Tanks tomorrow (Friday August 24, 11am-5pm) for ‘Tweet-Me-Up’, a mass participatory social media frenzy of underground counter cultures from around the globe. Tracey has collected digital works including art, music, fashion, photography and film which celebrate individuality and freedom of expression, with contributions coming as far as Eastern Siberia, Uzbekistan, Haiti, Trinidad and Japan. The show coincides with the ‘International Day Against Intolerance, Discrimination and Violence based on Musical Preferences, Lifestyle and Code,’ a day remembering Sophie Lancaster, the goth who died after her and her boyfriend were attacked in 2007. Catch Tracey talking at 3-4pm and follow #thetanks #tweetmeup on twitter for updates. For more info, see tate.org.uk. Although the project is an international alternative feast, we asked Tracey for her top five favourite London subcultures: 1. Cycle Couriers Fixed gear bikes, well defined leg muscles and attached radios can be seen zipping all over the capital. Couriers can cover 50 miles on a slow day, doubling to over a 100 miles on a busier one. For over a decade I co-owned the Foundry in Shoreditch, a bar, gallery and performance space which was also a hangout for cycle couriers at the end of a busy day. The trend of the fixed gear bikes used by many of the couriers has evolved into a popular style in recent years. 2. Lolitas Originating in Japan, the look is based on Victorian-era and Rococo period clothing. It began as an alternative modesty look, with knee-highs accompanied by cupcake-style petticoats, which developed into floor-length skirts with the addition of corsets. There are various Lolita subcultures: Gothic Lolitas originated in the late 1990’s in Harajuka and they wear one of my favorite looks: darker clothing set off with red lipstick and smoky kohl eye makeup, without the white powered face of the original Goth look. Another variation is Lolita Punk which incorporates short, androgynous hairstyles characteristic of punk and tattered fabric, ties, safety pins and chains, screen-printed fabrics and plaids. 3. Graffiti artists The nameless youth and their search for respect, status and identity bring some of the best visual elements to London’s back streets and transport highways. Many male and a growing number of female artists claim power and independence away from the everyday constraints presented by the nation’s institutions and they use this subculture to create their own identities and make the streets a more interesting place. 4. Hipsters I’ve enjoyed witnessing the rise and growth of the so-called Hipster subculture in east London. I’ve also been interested in the effect it’s had on some of the young people growing up in the changing landscape of the East End – the music, fashion and styles they go on to create. Jack Kerouac described 1940′s hipsters as ‘rising and roaming America, bumming and hitchhiking everywhere characters of a special spirituality.’ I’m looking forward to seeing ‘On The Road’ (out in October) to observe the effect it will have on the ever growing generation east London hipsters. 5. Straight Edge I love the juxtoposition of the hardcore punk who plays with the voyeur’s sensibilities when they announce that they’re Straight Edge. A rapidly growing counter-culture spawned from a subculture began as a direct reaction to the sexual revolution, hedonism and excess associated with punk rock where adherents refrain from using alcohol, tobacco and other recreational drugs. They follow a vegetarian or vegan diet and since the mid-80’s a number of ideals and beliefs have been incorporated into the movement from aspects of communism to animal rights. The vast majority of those who identify themselves as Straight Edge advocate non violent lifestyles.