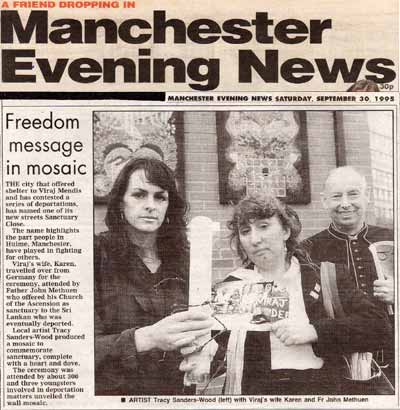 
Manchester Evening News -Tracey Sanders-Wood- Freedom message in mosaic Saturday, September 30, 1995
The city that offered shelter to Viraj Mendis and has contested a series of deportations, has named one of its new streets Sanctuary Close. The name highlights the part people in Hulme, manchester have played in fighting for others. Viraj's wife, karen, travelled over from Germany for the ceremony, attended by Father John Methuen who offered his Church of the Ascension as sanctuary to the Sri Lankan who was eventually deported. local artist Tracey Sanders-Wood produced a mosaic to commemorate sanctuary, complete with a heart and dove. The ceremony was attended by about 300 youngsters and three youngsters involved in deportation matters unveiled the wall mosaics. Photograph: ARTIST Tracey Sanders-Wood (left) with viraj's wife Karen and Fr John Methuen