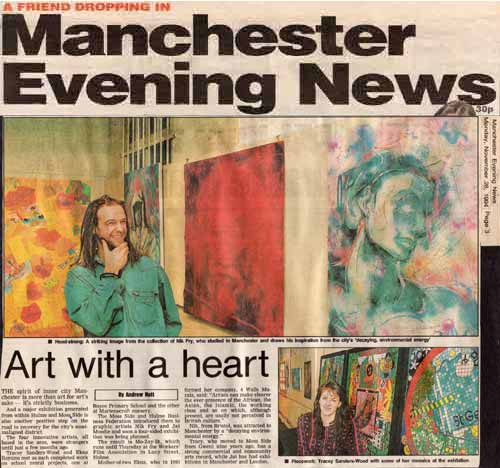 
Manchester Evening News -Tracey Sanders-Wood- Art with a heart Monday, November 28, 1994 by Andrew Nott
The spirit of inner city Manchester is more than art for art's sake - it's strictly business. And a major exhibition generated from within Hulme and Moss Side is also another positive step on the road to recovery for the city's most maligned district. The four innovative artists, all based in the area, were strangers until just a few months ago. Tracey Sanders-Wood and Ekua Bayunu met as each completed work on school mural projects, one at Royce Primary School and the other at Martenscroft nursery. The Moss Side and Hulme business Federation introduced them to graphic artists Nick Fry and Jai Moodie and soon a four sided exhibition was planned. The result is Mo-Zay-Ik, which runs until Thursday 1st the Workers' Film Association in Lucy Street, Hulme. Mother of two Ekua, who in 1993 formed her company 4 Walls Murals, said: "Artists can make clearer the ever-presence of the African, the Asian, the Islamic, the working class and so on which, although present, are not usually perceived in British culture." Tracey who moved to Moss Side from Gwent nine years ago, has a strong commercial and community arts record, while Jai has had exhibitions in Manchester and London. PHOTOGRAPH: Tracey sanders-Wood with some of her mosaics at the exhibition.