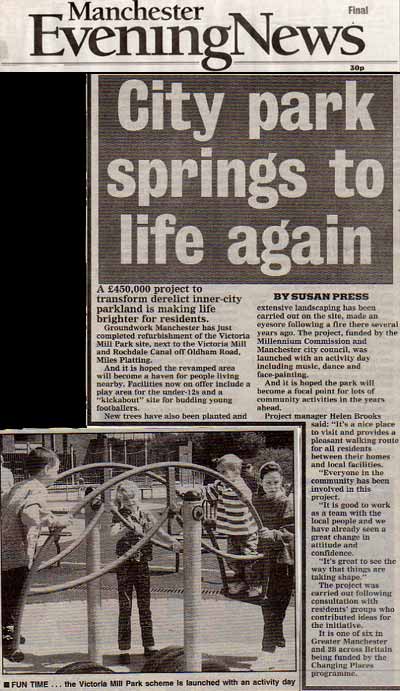 
Manchester Evening News -Tracey Sanders-Wood- City park springs into life again Friday July 15 1999 by Susan Press
A Ł450,000 project to transform derelict inner-city parkland is making life brighter for residents. Groundwork Manchester has just completed refurbishment of the Victoria Mill and Rochdale Canal off Oldham Road, Miles Platting. And it hoped the revamped area will become a haven for people living nearby. Facilities now on offer include a play area for the under 12's and a "kickabout" site for budding young footballers. New trees have also been planted and extensive landscaping has been carried out on the site, made an eyesore following a fire there several years ago. The project, funded by the Millennium Commission and Manchester city council, was launched with an activity day including music, dance and face-painting. And it is hoped the park will become a focal point for lots of community activities in the years ahead. Project manager Helen Brooks said: "It's a nice place to visit and provides a pleasant walking route for all residents between their homes and local facilities. "Everyone in the community has been involved in this project. It is good to work as a team with the local people and we have already seen a great change in attitude and confidence. It's great to see the way that things are taking shape." The project was carried out following consultation with residents' groups who contributed ideas for the initiative. It is one of six in Greater Manchester and 28 across Britain being funded by the Changing Places programme. PHOTOGRAPH: FUN TIME ... the Victoria Mill Park scheme is launched with activity day