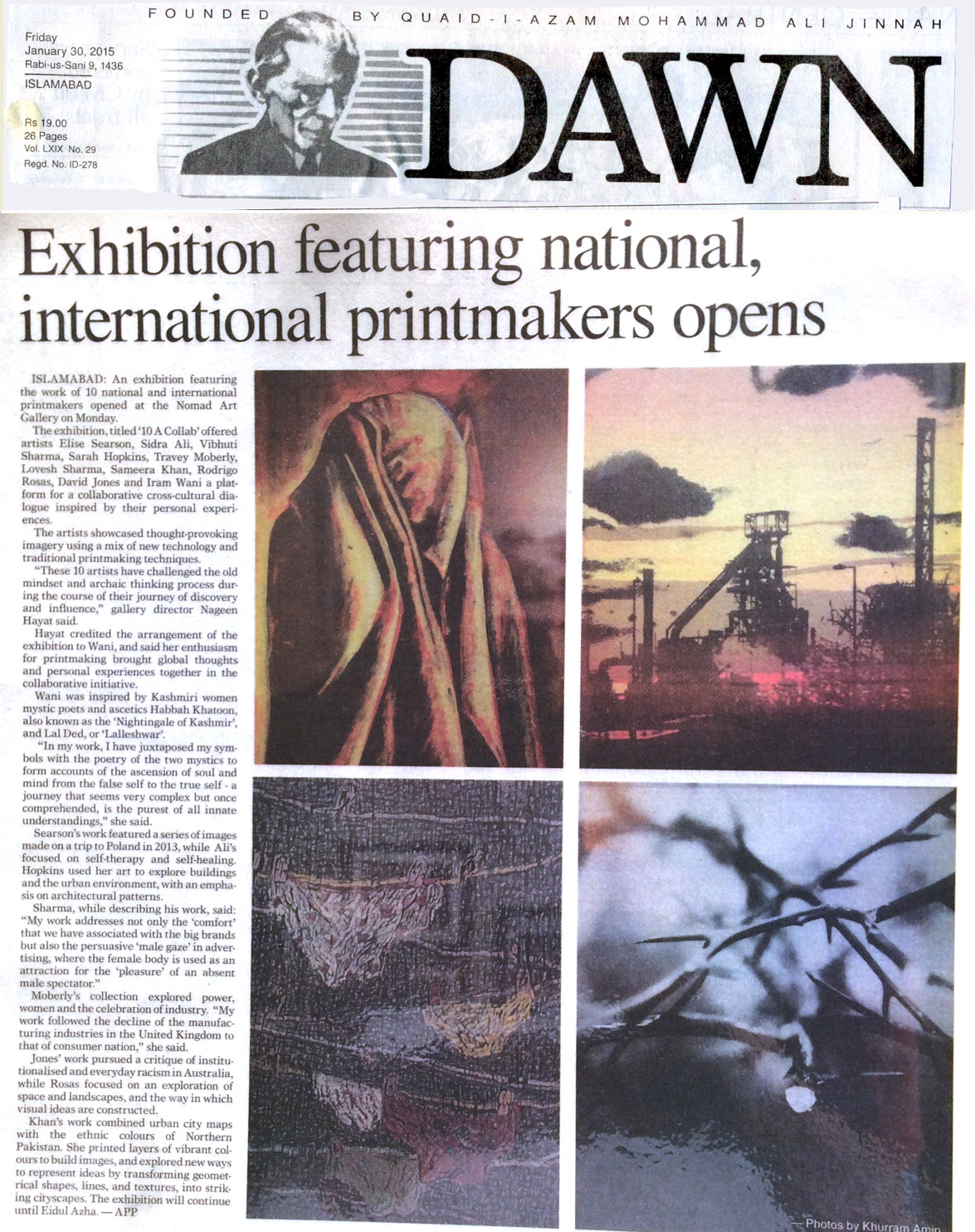 ISLAMABAD: An exhibition featuring the work of 10 national and international printmakers opened at the Nomad Art Gallery on Monday. The exhibition, titled ‘10 A Collab’ offered artists Elise Searson, Sidra Ali, Vibhuti Sharma, Sarah Hopkins, Travey Moberly, Lovesh Sharma, Sameera Khan, Rodrigo Rosas, David Jones and Iram Wani a platform for a collaborative cross-cultural dialogue inspired by their personal experiences. The artists showcased thought-provoking imagery using a mix of new technology and traditional printmaking techniques. “These 10 artists have challenged the old mindset and archaic thinking process during the course of their journey of discovery and influence,” gallery director Nageen Hayat said. Hayat credited the arrangement of the exhibition to Wani, and said her enthusiasm for printmaking brought global thoughts and personal experiences together in the collaborative initiative. Wani was inspired by Kashmiri women mystic poets and ascetics Habbah Khatoon, also known as the ‘Nightingale of Kashmir’, and Lal Ded, or ‘Lalleshwar’. “In my work, I have juxtaposed my symbols with the poetry of the two mystics to form accounts of the ascension of soul and mind from the false self to the true self - a journey that seems very complex but once comprehended, is the purest of all innate understandings,” she said. Searson’s work featured a series of images made on a trip to Poland in 2013, while Ali’s focused on self-therapy and self-healing. Hopkins used her art to explore buildings and the urban environment, with an emphasis on architectural patterns. Sharma, while describing his work, said: “My work addresses not only the ‘comfort’ that we have associated with the big brands but also the persuasive ‘male gaze’ in advertising, where the female body is used as an attraction for the ‘pleasure’ of an absent male spectator.” Moberly’s collection explored power, women and the celebration of industry. “My work followed the decline of the manufacturing industries in the United Kingdom to that of consumer nation,” she said. Jones’ work pursued a critique of institutionalised and everyday racism in Australia, while Rosas focused on an exploration of space and landscapes, and the way in which visual ideas are constructed. Khan’s work combined urban city maps with the ethnic colours of Northern Pakistan. She printed layers of vibrant colours to build images, and explored new ways to represent ideas by transforming geometrical shapes, lines, and textures, into striking cityscapes. The exhibition will continue until Eidul Azha.