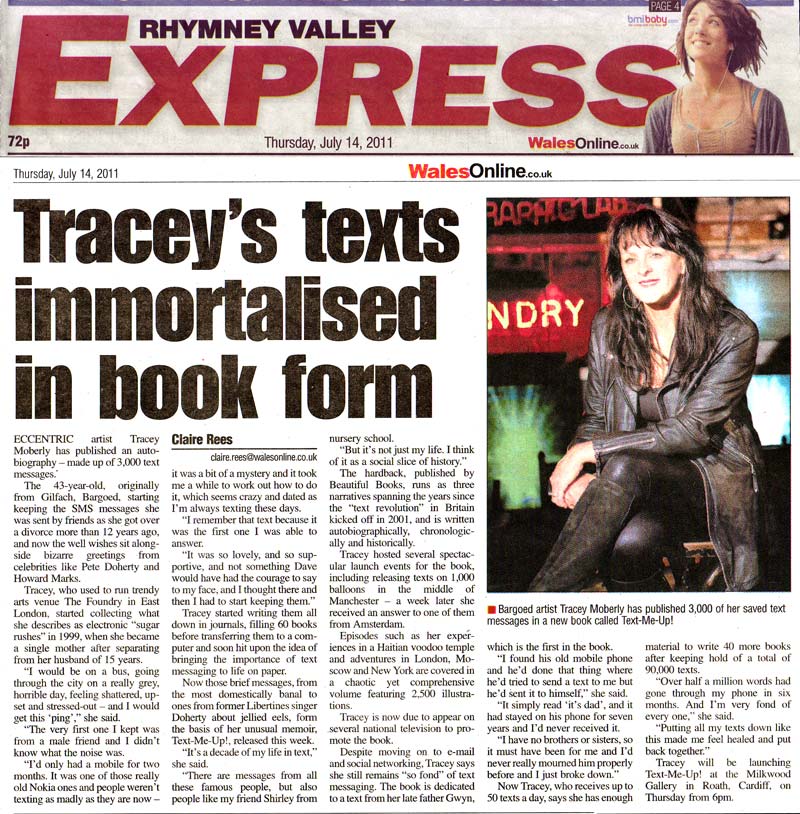 
Rhymney Valley Express [link] Tracey Moberly Tracey's texts immortalised in book form by Claire Rees 14 July 2011
ECCENTRIC artist Tracey Moberly has published an autobiography - made up of 3,000 text messages. The 43-year-old, originally from Gilfach, Bargoed, starting keeping the SMS messages she was sent by friends as she got over a divorce more than 12 years ago, and now the well wishes sit alongside bizarre greetings from celebrities like Pete Doherty and Howard Marks. Tracey, who used to run trendy arts venue The Foundry in East London, started collecting what she describes as electronic "sugar rushes" in 1999, when she became a single mother after separating from her husband of 15 years. "I would be on a bus, going through the city on a really grey, horrible day, feeling shattered, upset and stressed-out - and I would get this 'ping'," she said. "The very first one I kept was from a male friend and I didn't know what the noise was. "I'd only had a mobile for two months. It was one of those really old Nokia ones and people weren't texting as madly as they are now - it was a bit of a mystery and it took me a while to work out how to do it, which seems crazy and dated as I'm always texting these days. "I remember that text because it was the first one I was able to answer. "It was so lovely, and so supportive, and not something Dave would have had the courage to say to my face, and I thought there and then I had to start keeping them." Tracey started writing them all down in journals, filling 60 books before transferring them to a computer and soon hit upon the idea of bringing the importance of text messaging to life on paper. Now those brief messages, from the most domestically banal to ones from former Libertines singer Doherty about jellied eels, form the basis of her unusual memoir, Text-Me-Up!, released this week. "It's a decade of my life in text," she said. "There are messages from all these famous people, but also people like my friend Shirley from nursery school "But it's not just my life. I think of it as a social slice of history." The hardback, published by Beautiful Books, runs as three narratives spanning the years since the "text revolution" in Britain kicked off in 2001, and is written autobiographically, chronologically and historically. Tracey hosted several spectacular launch events for the book, including releasing texts on 1,000 balloons in the middle of Manchester - a week later she received an answer to one of them from Amsterdam. Episodes such as her experiences in a Haitian voodoo temple and adventures in London, Moscow and New York are covered in a chaotic yet comprehensive volume featuring 2,500 illustrations. Tracey is now due to appear on several national television to promote the book. Despite moving on to e-mail and social networking, Tracey says she still remains "so fond" of text messaging. The book is dedicated to a text from her late father Gwyn, which is the first in the book. "I found his old mobile phone and he'd done that thing where he'd tried to send a text to me but he'd sent it to himself," she said. "It simply read 'it's dad', and it had stayed on his phone for seven years and I'd never received it. "I have no brothers or sisters, so it must have been for me and I'd never really mourned him properly before and I just broke down." Now Tracey, who receives up to 50 texts a day, says she has enough material to write 40 more books after keeping hold of a total of 90,000 texts. "Over half a million words had gone through my phone in six months. And I'm very fond of every one," she said. "Putting all my texts down like this made me feel healed and put back together." Tracey will be launching Text-Me-Up! at the Milkwood Gallery in Roath, Cardiff, on Thursday from 6pm. Caption: 8argoed artist Tracey Moberly has published 3,000 of her saved text messages in a new book called Text-Me-Up!