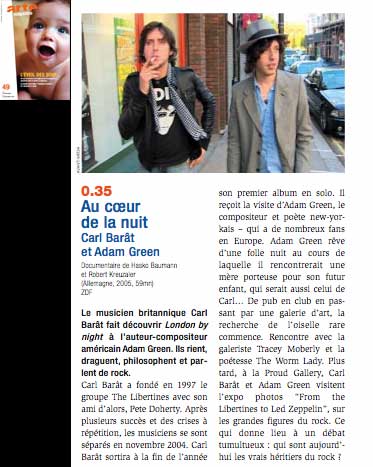 
ARTE magazine arte tv channel listings Tracey Sanders-Wood In the Heart of the Night Carl Barat and Adam Green december 2005
In 1997 Carl Barat formed the Libertines with his best friend Pete Doherty. After many successes and repeated crises, the musicians separated in November 2004. Carl Barat releases his first solo album at the end of the year. He receives a visit from Adam Green, New York composer and poet - who has quite a number of fans in Europe. Adam Green dreams of an insane night during which he would meet the surrogate mother of his future child, who would also be that of Carl. From pub to club and passing by an art gallery, their search for the rare bird commences, meeting with artist Tracey Moberly and poet The Worm Lady. Later, at the Proud Gallery, Carl Barat and Adam Green visit the photographic exhibition "from the Libertines to led Zeppelin", on the great figures of rock. Which triggers a tumultuous debatte: who are the true heirs of rock?